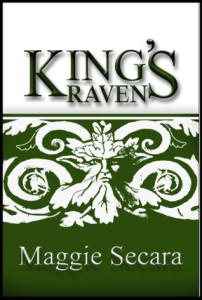 Description from Goodreads:
The heart of Faerie is the heart of the world.

While Oberon, immortal king of Faerie, lies under a terrible curse, the artistic spirit in the world is slipping away. The King’s Raven would do anything to lift the spell, if only it hadn’t also stripped him of his magic and flung him into an iron-bound past with a damaged memory.

The only thing that can save them both is sealed inside a riddle wrapped in a puzzle that spans the centuries. Even with the help of an Elizabethan magus, a Victorian spinster, and a mad reporter, can mortal musician Ben Harper find Raven in time to solve the riddle, stop a witch, and restore the creative heart of the world?

Review:
This is one of those books that was well written, probably well researched (I don’t know the subject well enough to know, but it feels right), and well edited but not a real hit with me. I mean I liked it. I still very much enjoyed Raven. I still appreciated Ben and I still thought their dynamic was fun. I still liked the creative side characters and the way things tied together. So, there is no argument that this is a good book.

Stylistically, however, it didn’t click with me. There is a lot of hopping back and forward in time and between characters and this is a technique that crawls under my skin and chafes. I don’t enjoy it. So, unfortunately my basic enjoyment of the story was compromised. It made the book feel overly long, I think.

Other than that one complaint (which is based on my personal preference) I have no reservations about recommending this book to fantasy readers. It’s well worth picking up, though I recommend reading The Dragon’s Ring first. 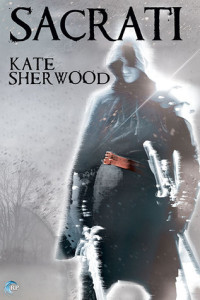 I received a copy of Sacrati, by Kate Sherwood, from Netgalley.

Description from Goodreads:
As an elite Sacrati fighter in the mighty Torian military, Theos is blessed with a city full of women who want to bear his children, and a barracks full of men proud to fight at his side and share his bed. He has everything he needs—until he captures Finnvid on a raid.

Finnvid is on a secret mission to prevent the Torian invasion of his homeland Elkat. Being enslaved by Torian soldiers wasn’t in his plans. Neither is his horrified fascination with the casual promiscuity of the Sacrati warriors. Men should not lie with other men—and he should not be so intrigued when they do. He definitely should not be most intrigued by the leader of the soldiers who captured him and plan to invade his home.

For Theos, everything would have been easier if the infuriating, lying, bewildering Elkati had never come into his life, but he can’t stay away. When betrayal and treachery threaten both their nations, they must work together to stop a war that could destroy their homes forever—even as they begin to question everything they’re fighting for.

Review:
I rather enjoyed this book. I did think that the way Theos treated Finnvid was COMPLETELY unbelievable for a man raised with normalised slavery. But once I deliberately forced myself to suspend that particular disbelief, I could roll with most the punches and enjoy myself.

I thought Theos was adorable—not dim, exactly, but not a man who thinks deeply either. I wasn’t as enamoured with Finnvid. I thought him a bit inconsistent. But as a counterbalance to Theos, he worked.

Unfortunately, the whole idea of what is ‘natural’ or ‘unnatural’ was over-emphasised and heavy handed. Yes, I understood the message, but didn’t need it reiterated quite so often. Similarly, I think the men lost the ability to verbalise anything but “I love you” in the last ten or so pages. It got redundant.

Speaking of endings (and this may be spoilerish), forcing the two men to desire monogamy felt like an artificial machination to provide the proper type of HEA to a Western audience. It didn’t at all fit the culture as established by the author.  What’s more, thinking past the last page, it would undoubtably cause future discord and I have trouble believing Finnvid would even request it of Theos (considering the social importance of sex between male Torians). I thought it was a cop out.

So, I had a few complaints, but for the most part, the writing was readable, there was some humour, I like the characters, it was an interesting world (at least the Torian culture was, Elkat was just a hollow reproduction of the recognisable), I don’t remember any editing issues and I enjoyed the time I spent with the book. It was just plain cute. I really can’t ask for much more than that. 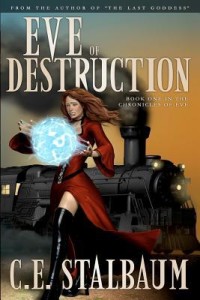