I borrowed copies of K. J. Charles’ A Case of Possession and Flight of Magpies (Magpies, #2 & 3). Thanks, T. I read and reviewed Book One of the series, The Magpie Lord, here. 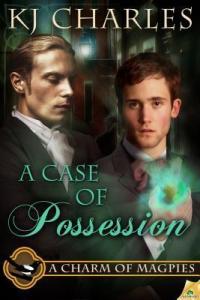 Description from Goodreads:
Lord Crane has never had a lover quite as elusive as Stephen Day. True, Stephen’s job as justiciar requires secrecy, but the magician’s disappearing act bothers Crane more than it should. When a blackmailer threatens to expose their illicit relationship, Crane knows a smart man would hop the first ship bound for China. But something unexpectedly stops him. His heart.

Stephen has problems of his own. As he investigates a plague of giant rats sweeping London, his sudden increase in power, boosted by his blood-and-sex bond with Crane, is rousing suspicion that he’s turned warlock. With all eyes watching him, the threat of exposure grows. Stephen could lose his friends, his job and his liberty over his relationship with Crane. He’s not sure if he can take that risk much longer. And Crane isn’t sure if he can ask him to.

The rats are closing in, and something has to give…

Review:
Not quite as marvellous as the first book but still quite enjoyable. I still like Crane and Day. I still adore Merrick. Yep, he’s by far my favourite of the lot. The new additions were nice too—other justicars, Leo, the men at the club.

The mystery itself was only ok, however. My complaints are very similar to book one’s. The villains seemed to come out of nowhere and there were bits of the story unexplained.

Despite those niggles I can’t wait to read the next book. Charles’ writing always grabs me. I love her dialogue and the subtle humour that often slips in. 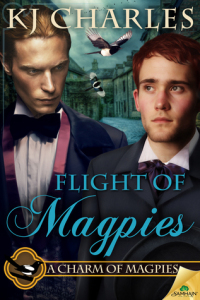 Description from Goodreads:
With the justiciary understaffed, a series of horrifying occult murders to be investigated, and a young student who is flying—literally—off the rails, magical law enforcer Stephen Day is under increasing stress. And his relationship with his aristocratic lover, Lord Crane, is beginning to feel the strain.

Crane chafes at the restrictions of England’s laws, and there’s a worrying development in the blood-and-sex bond he shares with Stephen. A development that makes a sensible man question if they should be together at all.

When a thief strikes at the heart of Crane’s home, a devastating loss brings his closest relationships into bitter conflict—especially his relationship with Stephen. And as old enemies, new enemies, and unexpected enemies paint the lovers into a corner, the pressure threatens to tear them apart.

Review:
The series is on an upswing. Again, the book is well written, with snappy dialogue and characters you can really feel. I simply adore Crane and Merrick’s relationship, build on decades of earned trust and shared hardship. Crane and Day are also hot together.

I did find myself squirming a bit with the domination/submission play of Crane and Day. I don’t normally have a problem with this, quite like is at times. Here however, being that Crane is, in fact, a Lord and Day a mere commoner and they bring those particular elements into the play, it felt too close to the way aristocrats, like Crane’s brother for example, take advantage of their position to abuse those of lower social classes. That’s probably a personal niggle, but it really squinked me out, possibly because it’s more strongly displayed here than in previous books.

On the other side of things, I’m not usually a huge fan of hearts and flowers and earnest declarations of love, but I did enjoy seeing Crane put it all on the verbal line for Day. It’s squee worthy (and yes that is a reference to this whole hoo-ha*). Despite not being a general fan of historical novels, I honestly can’t wait to continue this series.

*There has been a ‘storm in a teacup’ about disclosed or undisclosed friendships between readers and reviewers in my corner of the internet recently. And since I’ve commented on a couple of these threads I’ll make my disclosure here. It is a coincidence that I happened to be reading a book by K. J. Charles book at the same time that this (comments) exploded around reviewers of one of her other books.
I started this series before the kerfuffle got rolling. Since then, I have followed Charles on Twitter and was happily followed back. We have not however exchanged a single word, about reviews (which she’s clear on her blog that she doesn’t read) or anything else. I think she’s shown respectable restraint in staying out of the fray, even as others tried to pull her in, accused her of manipulation and suggested that she should be accountable and responsible for the actions of readers of her work.