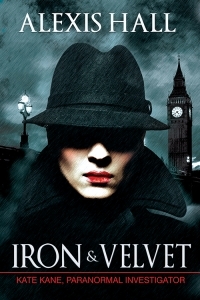 Description from Goodreads:
First rule in this line of business: don’t sleep with the client.My name’s Kate Kane, and when an eight-hundred-year-old vampire prince came to me with a case, I should have told her no. But I’ve always been a sucker for a femme fatale.It always goes the same way. You move too fast, you get in too deep, and before you know it, someone winds up dead. Last time it was my partner. This time it could be me. Yesterday a werewolf was murdered outside the Velvet, the night-time playground of one of the most powerful vampires in England. Now half the monsters in London are at each other’s throats, and the other half are trying to get in my pants. The Witch Queen will protect her own, the wolves are out for vengeance, and the vampires are out for, y’know, blood.I’ve got a killer on the loose, a war on the horizon, and a scotch on the rocks. It’s going to be an interesting day.

Review:
I have heard so many great things about this series and I’m pleased to say most of them held true. I really enjoyed this. It was funny, irreverent, witty and occasionally just a little naughty—all good things in my books. But I had a few complaints.

There is a lot of backstory that left me feeling like I had missed a first book or something. I eventually caught on, but the details were a bit slow in coming. I’m never overly joyed to start a book and find repeated references to characters I don’t know.

Also, though I appreciate that this is F/F paranormal romance slash urban fantasy (the first such book I’ve ever read), I thought that the lesbian card was over played. It seriously felt like every woman, or at least every powerful woman in London must be Sapphic and every one of them was extremely forward and trying to seduce Kate. It kind of felt like the same shtick played over and over.

Plus, if I’m honest, I don’t think the sex contributed as much as it should have. It all felt a little abrupt and abortive in the end—kiss, kiss, maybe lick, pinch, BITE, done; no significant build up or notable climax. meh.

What I liked, I really liked though. Kate was sarcastic and clever in a self-deprecating kind of way. She’s self assured and willing to admit she’s winging it most of the time. She’s strong without being unbelievably so. (Characters often become caricatures if they’re guaranteed to win every battle with ease.) Mostly I just laughed a lot. I really fell for Hall’s writing style and sense of humour. It’s as acerbic as Kate is and I’m a sucker for that. Plus, all of the running jokes, like “here lies Kate Kane…” and repeat/compounding lists, for example cracked me up.

An all out success. I can’t wait to read book two, Shadows & Dreams. 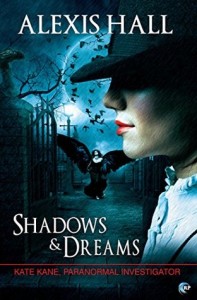 Description from Goodreads:
Second rule in this line of business: be careful who you kill. My name’s Kate Kane. And right now, I don’t know which is more dangerous: my job, or my girlfriend. My job makes me the go-to girl for every supernatural mystery in London. My girlfriend’s an eight-hundred-year-old vampire prince. Honestly, I think it’s probably a tie. A few weeks ago, I was hired for a simple missing person case. Next thing I know, I’m being arrested for murder, a vampire army is tearing up London, and even my dreams are out to get me. Something ancient, evil, and scary as hell is on the loose and looking for payback. The vampires are in chaos, the werewolves are culling everything, and the Witch Queen can’t protect everyone. Which means it’s down to me. And all I’ve got to hold back the shadows is a stiff drink, a quirky sidekick, my creepy ex-boyfriend, and the woman who left me for a tech startup. It’s going to be another interesting day.

Review:
I found Shadows & Dreams very similar to Iron & Velvet. In some ways, this is great. It’s an obvious sign of consistency and much of what I loved about book one I still love here. Kate is still a sarcastic, fly-by the-seat-of-her-pants badass, the side characters are still colourful, the writing is still flippant, and the story still engaging. There is a lot to adore here, just like in book one.

However, the flip side of that consistency coin is that all those things that annoyed me about book one are still there to annoy me here too. The prose during sex scenes was still blindingly purple and the sex still felt too clipped (the vampiric bite seemingly used as a substitute for conclusive penetration to signify completion of the act and cutting it off abruptly). Meh. Plus, there was just a vague sense of repeat for some of it, since it all felt so similar to book one.

I did love the addition of Kate and Elise’s running gag. They had a bit of a Manzai thing going on; Elise being the straight man and Kate the fool. It worked. It really worked. As did Patrick’s completely obsessive and oblivious neuroticism, Ashriel’s unexpected nice-guyness, Nimue’s patient attentions, Julian’s hedonism and Eve’s loveable geekiness. There is a huge cast here and with the exception of Corin, who can just go die somewhere, I loved them all.

I’m calling this one another success. I might grumble over little things, but I loved a lot more than I didn’t. I really hope there will be more of the Kate Kane, Paranormal Investigator Series.