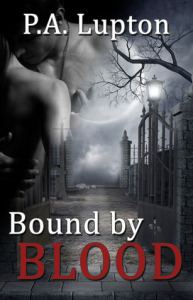 Book four of my own little personal Bound By Blood book challenge, where I set out to read all five books on my shelves called, you guessed it, Bound By Blood, is by P. A. Lupton. I grabbed it some times ago as a freebie on Amazon.

Description from Goodreads:
FBI agent and psychic, Brianna Reece, descends from an ancient and powerful bloodline of witches, only she doesn’t know it. But now that legacy has come back to bite her—literally.

In the shadows of night in Denver Colorado, a serial killer is hunting women, and FBI agent Brianna Reece is hunting the killer. Unlike any case she’s worked before, Brianna can’t ignore the prickling at the back of her neck when she glimpses the resemblance she shares with the victims. The investigation begins to touch even closer to home when it is revealed that all of the victims were also psychic.

Complicating matters further, Brianna is captivated by the FBI’s prime suspect Nathan Donovan. Though she senses he is hiding something from her, the attraction she feels for him is compelling, and unlike anything she’s ever experienced. Through a chance twist of fate, Nathan learns of Brianna’s ancestry and is forced to divulge secrets to Brianna that will change her life forever.

When she learns that the killer is an evil vampire, and he’s now set his sights on her, Nathan alone holds the key to awakening her dormant powers. Now he must race to teach her how to control her emergent gifts before she becomes the next victim.

Somewhat spoilerish ranty review
This is one of those books that when someone asks you how it was you stop, think really hard and can still only come up with “meh, it was OK.” And it is. It’s OK. It’s not good by any stretch of the imagination, but I can’t quite call it bad either. And I can’t come up with any one big issue I have with it, just a myriad of small annoyances that eventually put me off as a reader.

Things like the fact that the heroine, a psychic FBI agent, follows no procedural protocol at all and never suffers any consequences. In fact, her boss doesn’t even seem to exist. She starts investigating the case before she’s officially assigned to it, or even started her job for that matter. Then she’s immediately on the ball and working cases as if she’s worked there for years, even though it’s supposedly her first day. No need to meet the co-workers, get assigned a desk, learn the ropes, etc for Reece apparently.

But even more than that, she is assigned her first case as a member of the Denver FBI office and then it miraculously ends up all being about her. It’s not even like the killer comes after her. It really feels like she’s been randomly assigned a case, all ‘Yo, Reece, you’re up in rotation. Next case is yours,’ like and then suddenly it’s a personal vendetta against her and her family. Um, until a week earlier, she didn’t even live in the state and the murders had been going on for months (years, but no one knows that yet), so how realistic is that little twist? I think the author swapped plots about halfway through the book.

Plus, I never understood some of the basic groundwork of the plot. For example, if your whole family was being hunted down would your first thought be to scatter (disperse your power base) and bind the powers of your children, while not tell them about the dangers. Yep, that’s logic–if we pretend the danger doesn’t exist and make sure you can’t defend yourself if by chance it does, we’ll all be safe in the end. How does that even make sense in the first place?

Then there is the incredibly schmaltzy love. A lot of the book is dedicated to Reece and Donovan fawning over eachother. It’s an insta-love and it’s all so saccharine sweet. They go from I’m intensely attracted to you but you’re a suspect in my case, to I’ll love you forever, move in with me, in no time at all. Too fast, to forced, too much of the same. I got sick of all the kissing and fade to black sex.

Then there is the history of sexual assault that seemed to contribute nothing to the plot. This is a person button for me. A history of rape (or attempted rape in this case) can be important to a plot. I’m not arguing it can’t, but when it’s not an integral part of the plotting why include it? It neither elicits sympathy from the reader nor proves the woman’s resilience or strength. It was essentially pointless as far as I can see.

Then there were the multiple deus ex machina events. Every time Reece found herself in danger (including her attempted rape) she got out of it by developing some new, never suspected or attempted power that she miraculously wields to the detriment of her attacker.

Well, isn’t that convenient. Almost as convenient as the fact that she’s able to keep conscious and taunting her nemesis after he’s drugged her, stabbed her repeatedly (almost gutting her at one point) and beaten her about the face. It is, however, admittedly less convenient than the fact that her attempted sexual assaulter was still able to chase her through the woods and catch her after she kicked his knee to the side and broke the bones. I’m fairly sure that even with the adrenaline and endorphins of shock, someone with a broken leg wouldn’t be chasing her down and still trying to rape her.

Then there was her ridiculous bravado in the face of otherwise certain defeat. This is another personal annoyance for me. Why do some characters get to mouth off to authority figures who would squash anyone else for being so impertinent and get away with it? Granted, the bad guy isn’t an authority figure, but she never shut up with her snarky comments, even when he tortured her and still he never killed her. Then she meets the all powerful council who literally could squash her like a bug and, knowing nothing of the rules or etiquette, mouths off and challenges them, again with no consequences. Suicide by mouth, I call it, but always, somehow, with a stay of execution. I don’t get it or like it.

Then there is the classic, “Hi, I’m the villain you’ve been chasing. Let me monologue my ill-intent for a while.” And that same villain was fairly predictable in the end. No big surprises there. The villains’ need to go on and on about themselves is almost as bad as the endless and obvious info-drops throughout the book.

I will say that, with the exception of a too frequent use of names in dialogues and a few too many adjective and adverbs in the speech tags (this rarely works well for a first person narrative) the writing was pretty good. I have the re-edited version and though I noticed a few missing words and spaces, it wasn’t as badly edited as some of the early reviews say. I probably wouldn’t even bother mention it if it hadn’t been an obvious issue in the earlier edition.

So, for the right reader, one who doesn’t mind a lot of affectionate down time with the characters, for example, this will probably be a real winner. For me, it wasn’t.