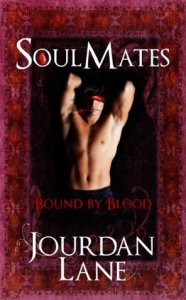 Description from Goodreads:
Houston nightclub Rave is famous for nearly-naked male dancers and beautiful bartenders. Like Peter, a young man with a strict rule about one-night stands with locals. He breaks that rule for Lucien, the owner of The Den, a rival nightclub where there are no boundaries, no taboos. Only he doesn’t realize just who Lucien is when he does. When Peter finds out that the man he wants to get to know even more is a vampire, he figures he should have stuck to that rule. He’s not fan of vampires or most other creatures of the night, but Lucien is relentless in his seduction. Peter resists Lucien as long as he can, but when he gives in, he does it in a big way, falling headfirst in to the dark, violent world of vampires, werewolves, and other creatures he’s only read about.

Peter and Lucien begin a very dangerous dance of sensual heat and deep emotion, one that causes them nothing but trouble. No one approves of the human and vampire match, including those in Lucien’s Coven, old enemies, and even older friends. Peter and Lucien have to struggle to stay together and protect those they love. Can they beat the forces that will try to tear them apart forever? And can they face what will become of Peter if they stay together?

Review:
The first thing anyone needs to know about this book is that it’s porn with plot. It’s a weak plot to be fair, but there is a little plotting. There is also lots and lots and lots and lots of sex. There is so much sex that about half way through this book, even suspending as much disbelief as one has to to read vampire/werewolf themed erotica, I started to cringe on behalf of the characters. Seriously, there couldn’t have had any skin left between them. I had sympathy friction burns and could only see them as rubbed absolutely raw. Raw, I tell you!

I did find the first third or so of the book clunky. Characters had complete 180° attitude shifts with no indication of an impetus of change. At one point, a man went from terrified of all things vampire to unafraid and half in love/lust with one in the course of a paragraph and I still have no idea why (other than he had to for the plot to progress). Meanwhile, his best friend went from encouraging him to get over his vampire-phobia to adamantly insisting he have nothing to do with the vampire, with no apparent reason to change his mind

The events of the story also moved from one to another, covering months at a time and glossing over the actual falling in love aspect of the romance with no transitions. It was jarring and I started to fear the book was heading toward a DNF. But once the characters accepted each-other things smoothed out. However, as they accepted each-other and Peter moved farther and farther into Lucien’s world their personalities changed drastically. They felt inconsistent.

Despite all that, the writing is really good and if you’re looking for some basic fap matter (or whatever the female equivalent is, schlick I think) this will do the trick.