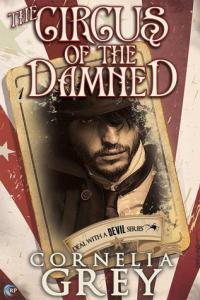 I received an ARC of Cornelia Grey‘s The Circus of the Damned from Netgalley.

Description from Goodreads:
Magician Gilbert Blake has spent his entire life conning drunkards in the seediest pubs in the darkest towns, careful to hide the true depths of his power. But when he spends a little too much time in Shadowsea and the infamous slumlord Count Reuben gets wind of his abilities, hiding within the Circus of the Damned may be Gilbert’s only chance at survival.

But there’s more to the Circus than meets the eye. Every time a performer dies, a new one must take his place, or the entire circus suffers the consequences. And while the handsome ringmaster Jesse isn’t one to coerce unwilling performers into giving up their souls to the devil, a recent death in their ranks makes Gilbert exactly what they need.

Yet the longer Gilbert stays with the Circus, the more danger he seems to bring them. Being with Jesse is more than Gilbert could have hoped for, but as Count Reuben’s men continue to search for Gilbert and the Circus loses another performer, they all face running out of time long before the Devil claims his due.

Review:
CUTE! Just so stinking cute. This is the first Cornelia Grey book I’ve had the pleasure of reading, but you can bet your last flimsy dollar I’ll be on the lookout for more. Thumbs up.

There was a quietly bisexual lead falling in love with a beautiful man, a cast containing a satisfying variety of age, gender, color, even species (I think), a few yummy, but in no way smutty sex scenes, some evocative writing, interesting side characters (though there are a lot of them), some light steampunk elements and a HEA ending. Plenty to recommend this novel to any number of readers.

My only complaint is that I never really felt like I got to know the characters in any depth. I got to know what was happening around them and what they did, but not them and I really wanted to. But that’s a relatively small criticism for something I enjoyed as much as I did this one.