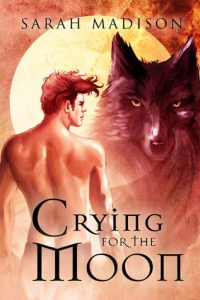 I borrowed a copy of Crying for the Moon, by Sarah Madison from Hoopla, through my local library.

Description from Goodreads:
Vampire Alexei Novik may have the teeth and the coffin, but he’s given up the lifestyle for an old fixer-upper in the Blue Ridge Mountains. Weary of his past, Alex plans to keep to himself, but it seems his sexy, new neighbor, Tate, can’t take the hint—a good thing, since it turns out he’s handy for all kinds of things around the house. Tate even gets along with Alex’s werewolf friends, though one of them pointedly reminds Alex that their friendship is a bad idea.

If a platonic relationship is a bad idea, the growing attraction between Tate and Alex is a disaster waiting to happen. Loving Tate will draw him into Alex’s dangerous world, and Alex is torn between having the relationship he’s always craved and keeping Tate safe. Tate won’t take no for an answer, however, and seems to handle everything Alex can throw at him without blinking. Just when he thinks things might turn out all right after all, Alex’s past catches up with him—forcing him to make a terrible choice.

Review:
So that was, um, well, that was….not very good, in my opinion. Look the writing is mechanically fine, but the story is flat and dull. There is almost no conflict. Only one bit pops up predictably (because the reader sees the obvious foreshadowing) out of nowhere (because it’s not there and then it is for no real reason) and then is defeated in no time at all (because of course it is). There are large chunks dedicated to unimportant things and, unless I was just misunderstanding what was supposed to be happening, I would advise the author to actually see an uncut penis before suggesting the things she seems to think could easily be done with a foreskin and maybe a penis in general if she imagines someone could blithely stick their tongue down a urethra. I’m just sayin’.

I did like the characters and the representation of werewolf pack behavior and the interesting lore around the vampire’s coffin. I didn’t really approve of the Alexi’s solution at the end, but that’s neither here nor there. I think this is a case of just not a good book for me. I’m sure others might love it.

Bonus side note: I especially cringed when I hit this sentence: “Her sculptured cheekbones and rich, café au lait coloring gave her an exotic look that made her stand out among women in general, but among Nick’s friends, she was clearly the diamond in the rough.” The author managed to use a food reference to describe a black woman (who was of course from New Orleans), squeeze the dreaded ‘exotic’ word in there to fetishize her, and then topped it with a cliche, all in one sentence. I’m a bit iffy about the ‘stand out among women in general’ too. So, that whole sentence left me agape.