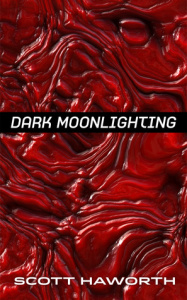 Author, Scott Haworth sent me a copy of Dark Moonlighting.

Description from Goodreads:
Nick Whittier, having been alive for six centuries, has had plenty of time to master three professions. In a typical week he works as a police officer, lawyer and doctor and still finds time to murder someone and drink their blood. He used to feel guilty about the killings, but now he restricts himself to only eating the worst members of society. Few people in Starside, Illinois seem to care about the untimely deaths of spam e-mailers, pushy Jehovah Witnesses and politicians. However, the barriers between Nick’s three secret lives start to crumble when a mysterious man from his past arrives in town seeking revenge. Nick must move quickly to prevent the three women in his life, and the authorities who are hunting him, from discovering his terrible secret.

Review:
Dark Moonlighting is a bit hard to review. It’s satire and as satire it’s quite funny. If I hadn’t known going in that it was meant to be sarcastic, I’d probably be accusing the author of having the sense of humour of a 5th grader, but as purposeful humour it’s pretty good. I’d recommend the book for anyone who’s familiar with or has a love for TV cop and medical dramas.

The problem is that the joke got old at about half way through the book. At about that point, two things happened roughly simultaneously. One, the jokes (for lack of a better word) became predictable and thus lost their lustre, and two, the satire went from being relatively subtle to openly interacting with/through the characters and story. This made the whole thing feel slapstick and clumsy instead of cleaver and satirical (even when some of this same clumsiness was, in itself, a satire). Dr. Condo and the FBI agents were especially heavy-handed and groan-inducing.

The writing is pretty good. I found it to be well edited. I enjoyed the autobiographical nature of the story and especially liked the ending. All and all, an enjoyable enough book, even if I preferred the first half to the second.