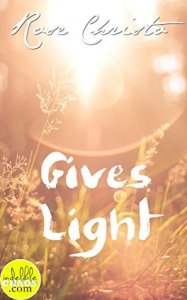 I grabbed a copy of Rose Christo‘s novel, Gives Light, from the Amazon free list.

Description from Goodreads:
Sixteen-year-old Skylar is witty, empathetic, sensitive–and mute. Skylar hasn’t uttered a single word since his mother died eleven years ago, a senseless tragedy he’s grateful he doesn’t have to talk about.

When Skylar’s father mysteriously vanishes one summer afternoon, Skylar is placed in the temporary custody of his only remaining relative, an estranged grandmother living on an Indian reservation in the middle of arid Arizona.

Adapting to a brand new culture is the least of Skylar’s qualms. Because Skylar’s mother did not die a peaceful death. Skylar’s mother was murdered eleven years ago on the Nettlebush Reserve. And her murderer left behind a son.

And he is like nothing Skylar has ever known.

Review:
I generally thought this was very sweet, but before I do anything else I’m going to mention one major problem I had with the book. Then I’m going to make a conscious and concerted effort to ignore it, because that’s how I read the book.

Skylar is said to be 16-years-old and Rafael probably a little older. I’ve never been a teenage boy, but it’s my understanding that at that age they are walking balls of hormones and can be expected to have become intimately familiar with “themselves” and their ever-present “urges.”

Skyar and Rafael are innocents. Christo went to great pains to establish this. For example, at one early point Skylar wanted to hug someone in thanks. He acknowledges that most boys his age wouldn’t, but he did. He’s thus shown, to be less emotionally reserved (more child-like) than his peers. Later, Rafael saw a pack of Trojans and didn’t even know what they were. I know the reservation was remote and didn’t have TV and such, but I’m supposed to believe men don’t talk?

Even after they fall in love (I don’t think I’m spoiling anything by telling you it’s a romance.) there is no sexual tension. They remain blissfully innocent of the temptations of the flesh. Another, less forgiving, reviewer called them “boy-shaped, iniquity-free automatons.” It’s not wholly inaccurate. I however thought all their innocence smacked of prepubescence and compromised the credibility of the book.

Now, I do understand that this is YA m/m romance and had the boys been humping like rabbits, or more realistic teenagers, it would have been a very different book and lost a little of it’s lightness. I do get it. So I do understand why it’s written the way it is. That’s why I decided to let the issue go and focus on the rest of the plot.

But sex probably could have been addressed, or at least it could have been suggested that they even knew what it was. All the ‘funny feelings in their stomachs’ didn’t really work as a substitute for the raging erection realism would have required.

Other than that one big issue, I basically read this book with a silly smile slapped on my face. It’s sweet, that’s the best word for it. Seeing Skylar find a place in the world and Rafael find someone to give him the forgiveness he’s always wanted was heart warming.

I did think the characters were a little gendered, with Skylar and his disability being the weaker and therefore feminized half of the pairing. This showed in the ways Rafael, being gentlemanly, always held his hand and walked him home, but never the other way around. Skylar loved the way Rafael’s arms made him feels safe and how naturally protective Rafael was of him, but never the other way around. The way Rafael was a bundle of energy and action, while Skylar was calm and sedate. The way Rafael was broad and strong, while Skylar was smaller, but long and wispy. The way Skylar chose to cook because he couldn’t abide the cruelty of hunting, while Rafael was an expert hunter and outdoorsman.

None of it was overt and any one or two of those distinctions wouldn’t mean anything. But taken all together it starts to feel like maybe it does.

I also thought everyone’s, not only easy acceptance of their relationship, but tendency to come to Skylar unprompted to tell him they had no problem with who he loved was just too easy. Again, it was sweet that everyone was so open-minded and accepting, but it smoothed everything out with no effort on Skylar or Rafael’s part. This is especially true as the book states more than once how the Shoshone way is to keep their opinions to themselves and not interfere in others’ private lives.

The writing itself was beautiful. It bordered on purple on occasion, but mostly stayed on the right side of the line. I also really liked the narratives tone. It was quite witty. There was also a wonderful theme of forgiveness and the importance of community. All-in-all, I had some complaints, but I enjoyed it all the same.