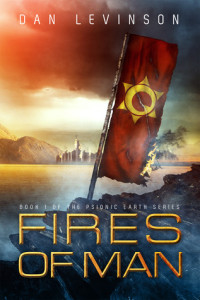 Author, Dan Levinson sent me an e-ARC of Fires of Man (due out this spring).

Description from Goodreads:
In a world where a gifted few can manipulate reality with their minds, two great nations—Calchis and Orion—employ these psionic powers in a covert war for global superiority. In the heart of Calchis, a powerful young psion named Aaron Waverly is kidnapped, and forcibly conscripted. To the north, in the capital, a plan is hatched to decimate Orion, to be carried out by the ruthless operative known only as “Agent.” In Orion, fresh recruit Stockton Finn comes to terms with his incredible new powers, and learns firsthand how dangerous they can be. Meanwhile, officers Nyne Allen and Kay Barrett navigate the aftermath of their shattered love affair, oblivious to the fact that Calchis draws ever closer to destroying the tenuous peace. Finally, in the arctic land of Zenith, Calchan archaeologist Faith Santia unearths a millennia-old ruin. This lost temple might just hold the hidden history of psionic powers, as well as hints of a deeper mystery . . . that could shake the foundations of all mankind.

Review:
Fires of Man is set in an alternative Earth, in and alternative 2012. This made for an interesting, if occasionally jarring, mix of the new and exciting with the familiar and mundane. For example, characters practiced their amazing Psionic powers and then sat down with a beer and the TV remote. Plus, all of the place names are just a little off from being recognisable. It’s almost the Earth we know, but not quite. It took me a while to get used to it.

There is a lot I could say about this book, but I’ll start by saying the writing is excellent. The dialogue feels realistic and it’s quite well edited. There are some really thought provoking subtexts too—the horrors of war, the transition from boy to man to soldier, the value of morals when confronted with the reality of kill or be killed, love, etc. But in the end it’s really just the beginning of something.

This is definitely, DEFINITELY not a stand alone book. Nothing concludes and ALL of the threads are left hanging. In fact, I might call this whole book a set up for the actual story to come, because it’s not so much about anything that happens as it is about getting to know the people who will apparently be important at some future point.

This isn’t to say nothing happens, a lot does. Nor is it to say it wasn’t enjoyable. It was. Those characters are all interesting and highly engageable. The world and it’s politics is interesting and the hints at the final shebang looks intriguing. But there is a surprisingly long character list, with all of them being given equal time. I’d have a hard time pinpointing a single one as the MAIN character at this point. Additionally, few of them cross paths at any time in the novel. So, in a way, this was really 5 or 6 stories in one book. The reader has to take it on faith that eventually in some future book they will all play a significant role in some singular something.

I enjoyed the writing a lot, heck I enjoyed the book. But if I had it to read again I wouldn’t bother until there was a sequel or two available, because I’m done now and I know half a story (maybe less if this is going to be a longer series). This annoys me. However, I am not so oblivious to the basic realities of publishing that I don’t recognise that at 400 pages the book essentially reached its maximum allowable length and had to be broken up.