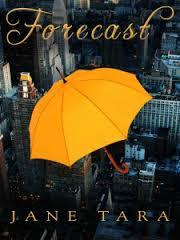 I downloaded Jane Tara‘s Forecast from the Amazon free list. It is still free.

Description from Goodreads:
The Shakespeare women were what the locals of Greenwich Village called “gifted.”Sure, Rowie’s predictions were helpful for forecasting the weather or finding someone’s lost grandkid. But when it came to love, her abilities were more like a curse. Why bother dating a guy if you knew at the first kiss he was destined for some blonde from New Jersey? Nope, Rowie was much happier bringing together the people she knew were a perfect match. Until the day she kissed the man whose future she couldn’t foresee.

Review:
Well written but 100% predictable and full of far, far too many feel-goods for my taste. It’s the sort of book where the heroine is an amazing Mary Sue that everyone except the single person who has to dislike her to create enough dissonance for a plot loves her. Then, once the necessary challenge has been presented and mastered the single bitch becomes mysteriously contrite, apologises and is instantly forgiven (because there can’t be any lingering hard feelings apparently). Everyone, and I mean EVERYONE, ends up happy. (How realistic is that?) I know many people love this aspect of romantic comedy. Me? I’ve over here suffocating on all of the hearts and flowers flooding the room and blocking the oxygen from reaching my poor withered heart. Plus, apparently I’m not nearly as good a person as Rowie, because I wouldn’t have forgiven so easily and have a hard time relating to how she could have. Her easy forgiveness kind of felt like a betrayal to me. I also thought the need to have every single person in the book paired off in the end, thus requiring attention be paid to their bit of the story, thinned the plot (a lot). I mean that’s Rowie, her mother and grandmother, Angel, Petey, Jack, Drew, Georgette, William, Shin and Jess. That’s a pretty full list of people to find partners for and try to keep a plot tight. It didn’t really work that well. Again, the book is well written and I didn’t notice any editing errors. It’s also pretty darned funny. I liked a lot of the sarcastic commentary. So, it’s not a fail in general, just a fail for me. On a side note: The series is called the Shakespeare Sisters, but Rowies an only child. Figure that one out.