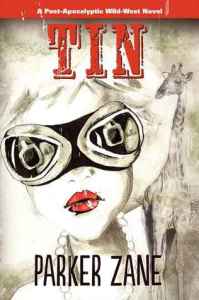 I downloaded a copy of Tin, by Parker Zane, while it was free on Amazon.

Description from Goodreads:
Tin, Dead End District was a forgotten freckle of a town in the Southwestern desert of Old America. Erected after the ’63 meteor showers that decimated the world as we knew it, Tin had only known sandstorms, drought, sweltering heat, lack of technology and fear. And until 2095, Sakura Blue had only known Tin.

With her parents murdered, and her giraffe ranch faltering, Sakura lived by Tin’s motto. Keep your head down, tail tucked and taxes paid. Until the life of her precious sister, Fuyuko is on the line. Now Sakura has a new motto. Who can I trust, and who will end up dead?

Review:
I love the cover. The writing here was fine and the dystopian future seemed interesting. I even liked some aspects of the characters. Sakura had a pleasantly Machiavellian attitude toward using people that I appreciated. Finn was honorable and I loved his little tick. The wolf was the villain with a wounded heart. All things I like in a book.

Unfortunately, the book had a lot more that I don’t. First and foremost, I finished it wondering what the point had been. Yes, the sister was found, but a whole lot of something was set up and never followed through with. Most importantly, whatever it is about Sakura that makes the narrator want to tell her story 40 or so years later. Nothing of historical note happens here.

Second, the blurb makes Sakura sound like she’s going to be a bad ass. Instead she flails about helplessly basically deciding which man to attach herself to for the best results.

Third, while there was a pleasant cultural mix here it started to feel like variety was added just for varieties sake. People raise giraffe and zebra, instead of horses and cattle. Women wear saris, kimonos and obis instead of skirts, dresses or belts (not to mention pants). The food is all Indian and the villain Kenyan. Despite being set in a dystopian America there is almost nothing distinctly American left and it felt cluttered and artificial.

Lastly, for a rather short book that never manages to find its way to the point, it spends an awful lot of time on the cliché rich man beautifies a woman shtick. What’s worse, the cross dressing fashion designer queen with an attitude couldn’t have been more stereotypical if Zane had tried for it.

I was disappointed in this. Zane has some apparent talent, but the book left me wanting in a lot of ways.