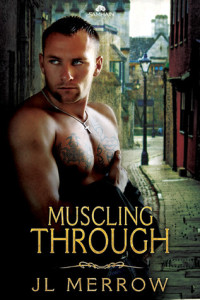 I bought a copy of J. L. Merrow‘s Muscling Through.

Description from Goodreads:
The bigger they come, the harder they fall… in love.Cambridge art professor Larry Morton takes one, alcohol-glazed look at the huge, tattooed man looming in a dark alley, and assumes he’s done for. Moments later he finds himself disarmed—literally and figuratively. And, the next morning, he can’t rest until he offers an apology to the man who turned out to be more gentle than giant. Larry’s intrigued to find there’s more to Al Fletcher than meets the eye; he possesses a natural artistic talent that shines through untutored technique. Unfortunately, no one else seems to see the sensitive soul beneath Al’s imposing, scarred, undeniably sexy exterior. Least of all Larry’s class-conscious family, who would like nothing better than to split up this mismatched pair. Is it physical? Oh, yes, it’s deliciously physical, and so much more—which makes Larry’s next task so daunting. Not just convincing his colleagues, friends and family that their relationship is more than skin deep. It’s convincing Al. Contains comic misunderstandings, misuse of art materials, and unexpected poignancy.

Review:
I generally tend toward long rambling, somewhat rant-like reviews. But I can’t do that for Muscling Through. I just don’t think I can do it justice. I loved it. I loved Alan. I did. Everyone does. But I loved Larry too. I don’t think Larry gets enough credit for being open enough to look past Alan’s rough exterior to see the yummy, gooey-soft centre. And as a couple they are a marvellous example of opposites attracting and working oh so well together. But beyond having two marvellous main characters, the book is chocked full of amazingly transparent ‘Awww’ moments. You see, Alan’s simplicity (and lets face it he’s as dumb as a box of rocks) grants him the right to utterances that would, in the mouths of more intellectually capable individuals, ring false and possibly even Machiavellian. But there is no guile in Alan. You feel it. You trust it and all those wretched sappy-sweet gag reflexes relax as unneeded. But there is also A LOT of humour. Insults and ill intentions bounce off Alan like Teflon. He’s untouchable in his savant-like serenity. He often lets things go as unimportant, but just as often he lets them go as not understood or misunderstood. More than once I had to set the Kindle down until my laughing fit passed. There are just too many examples of stupid-happy resulting in priceless humour. Only made even better by the fact that he’s usually completely oblivious to it. The writing is almost painfully straightforward, as it should be when narrated by someone as literal and uncomplicated as Alan. And it’s short, but the right length for its story. So, while I want, want, want more, I admit the author knew better than to give it to us. This is one of those books I’ll mourn the end of. I wish I was the sort who read books more than once. This would be a re-read. Highly recommened.