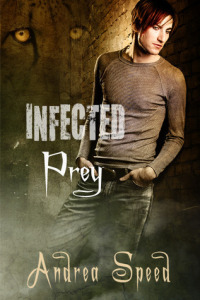 I bought a copy of Prey (Infected, #1), by Andrea Speed. Then I borrowed a copy of Bloodlines.

Description from Goodreads:
In a world where a werecat virus has changed society, Roan McKichan, a born infected and ex-cop, works as a private detective trying to solve crimes involving other infecteds.

The murder of a former cop draws Roan into an odd case where an unidentifiable species of cat appears to be showing an unusual level of intelligence. He juggles that with trying to find a missing teenage boy, who, unbeknownst to his parents, was “cat” obsessed. And when someone is brutally murdering infecteds, Eli Winters, leader of the Church of the Divine Transformation, hires Roan to find the killer before he closes in on Eli.

Working the crimes will lead Roan through a maze of hate, personal grudges, and mortal danger. With help from his tiger-strain infected partner, Paris Lehane, he does his best to survive in a world that hates and fears their kind… and occasionally worships them.

Review:
Very enjoyable Urban Fantasy (and it is UF—the romance is already established and there is no sex). I was thrown for a loop when the book ended at 48% though. Nothing in the synopsis states that the book is actually two novellas. (So the last ~50% is the second story.) And while each is very good, I do like to know what I’m getting into.

The main character, Roan was a wonderfully jaded and sarcastic P.I. I enjoyed his love for his boyfriend, Paris. Similarly, I liked Paris’ opposite personality but equally heart-felt love. They made a wonderful pair. It was fun to get to know Roan from his own perspective and then get to see him from Paris’ point of view too. It felt kind of like a gift to be given the small insights Roan refused to acknowledge about himself.

The cast as a whole was also pleasantly diverse. The police chief is a woman, there are side characters of multiple races and ethnicities, Paris is bisexual (and Canadian), there’s a lesbian and Roan is gay. There’s even a disabled character in a wheelchair. I really liked encountering a more representative slice of American life.

The whole ‘kitty culture’ was an interesting twist on the shifter genre. It was nice to see the darker side of it. There is nothing glamorous about being infected. The characters also encounter the darker side of life in a real sort of way that avoids feeling like any of it was appropriated for mere titillation. It felt very intelligent, for lack of a better way to describe it.

I did think the narrative was a little repetitive. There were just some things, like how good-looking Paris was, that readers are told over and over and over again. The descriptions of people were extremely heavy too. It often broke the flow of the book to stop and read a whole page on someone’s appearance. And I didn’t care for all the music references. Mostly because I’m apparently not cool enough to get the significance of a band choice, so they held no resonance for me. Despite that, I’m hoping to get my hands on book two, which would be story three. See how confusing that is? 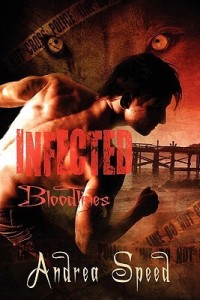 The newly married Roan is struggling to balance his work with his home life as he grows increasingly distracted by his husband Paris’s declining health. One case with strong emotions attached takes up most of his time: finding the murderer of a missing little rich girl. It’s a family with secrets so toxic they’d rather no one investigate, and there’s no shortage of suspects. But despite the dangers and obstructions involved, Roan won’t stop… until he loses something infinitely precious as well.

Oh, it’s been a looong time since a book reduced me to a blubbering mess. But this book had me in such tears that, unprompted, my four-year-old brought me a handkerchief with which to dry my eyes and blow my nose. I was emotionally destroyed. Truth be told, I read the book knowing that would be the result but it was worth it.

Contradictorily, when not drowning in sorrow I found a lot of humor in this book. It was a dry sarcastic sort of humor, just this side of British, really, one of my favorite types. There were a lot of chuckles.

I did think the murder mystery wrapped up with sudden ease and it was definitely second to the emotional drama going on in Roan and Paris’ life. (Though, it’s meant to be.) But as in the previous book, I loved the characters and the gritty realism of the world they all live in.