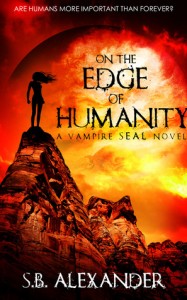 I grabbed S.B. Alexander‘s Vampire SEAL novel On the Edge of Humanity from the Amazon KDP list.

Description from Goodreads:
Sixteen-year-old Jo Mason is lost in a world where traipsing from one foster home to another is normal. She hates her life, she hates school and on most days, she hates living. If it weren’t for her twin brother Sam, she may already be dead.

Her normal world shifts one hundred and eighty degrees when she discovers her own blood tastes like candy and her eyes change colors like a mood ring. On top of that, her eyesight seems to be failing when she spies an otherworldly man sporting bloodstained canines trying to strangle a cop. The developments are shrouded when Sam goes missing between Anger Management class and History class.

She’s called to the principal’s office to meet Lieutenant Webb London, a Navy SEAL who is part of a secret team of natural-born vampires. His mission is to protect the twins from an evil cartel, but he’s too late. With Jo now under his protection, his team searches for Sam.

However, finding and rescuing Sam from the evil cartel may be the easy part. Jo learns she carries a dormant vampire gene that, if activated, could save him. As her normal world fades even more, pushing her closer to the edge of humanity, Jo must decide if her human life is more important than her twin brother.

With time as her enemy, she struggles to make a life-changing decision for both her and Sam.

Review:
I have to be honest. Even though I can’t really fault the writing of this book I didn’t like it. I lost count of how many aspects of it I just personally didn’t like. That’s not to say others wouldn’t, or that it isn’t actually a good book, but I didn’t like it. Lets start and I’ll explain why.

First off, given the series title, Vampire SEALs, I was expecting at least a little vampire/military badassness. I read the description and knew that wasn’t going to be the main focus, but I expected some. There wasn’t any. This is a YA book about one scared little girl’s attempt come to terms with her situation. Major disappointment right there.

Next, Jo simply didn’t DO anything of substance. She asked a lot of ineffectual questions, whined, and vomited a lot. That’s about it. The realm of action was left entirely to the males. Even Ben, the token human, feeble as his attempts might have been, came out fighting. Jo just stood around and waited to be told what to do. This extended even as far as her own feelings. As an example, when she showed any anger toward her father he responded as such: “I lost both of you once and I don’t want to screw this up again. I have a chance to get to know my daughter and possibly my son. So call me selfish if you want to, but don’t ever, ever disrespect me again.” However, when Sam woke up equally as angry with dear old dad he was allowed to have a fist fight with him. People actually stood back and let them hash it out.

Sam was allowed expression and possession of his own emotions. Like a child, Jo was chastised or physically restrained anytime she expressed anything but compliance. This paternalistic infantilization was further enhanced by the constant act of putting a finger under her chin to force her to look up at someone. I think every male character in the book did it to her at least once. Everyone of them apparently has more control over where she looks than she does. I wanted to vomit myself.

I mentioned ineffectual questions. Jo asked questions constantly, good ones too a lot of times. But was almost never answered. Yea, I get it. She was dealing with a top secret organisation so some things would remain secretive, but I got seriously sick of being denied information. Because, of course, as a reader I was left without the information just as often as Jo was. (As a side note, Sam got all of his answers almost without having to ask and Ben seemed to often have things explained to him.) On the flip side, Jo also constantly asked herself questions along the lines of, ‘How did my life get here?’ There were so many of them I wanted to scream. Add the rhetorical questions, which are of course unanswered, to the ones the SEALs didn’t answer and you probably have half the book right there. It didn’t leave me feeling particularly satisfied.

Then there is the fact that the book started with an attempted rape. I wasn’t yet invested enough in the book to sit comfortably through that. I obviously made it through, but barely. It seemed to be a running theme that Jo attracted creeps and that Sam was constantly having to protect her from them. (Notice the continued helpless theme there?) But Jo somehow managed to hang tenaciously to her “I’m ugly” mantra, even in the face of evidence to the contrary.

So to conclude, I disliked the book. I didn’t enjoy it, but those things that irked me so badly are almost all personal preference kind of things. I hate seeing female characters patronised. It almost always rubs me the wrong way. That may not be the case for someone else, so I’ll still give the book three stars.