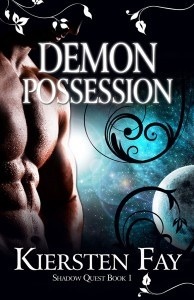 Description from Goodreads:
After being enslaved on the spaceship Extarga for most of her life Analia has no memory of her life before, and has lost all knowledge of her people. Her mysterious gift and pointed ears are the only indication that she is different.

Analia is alone, and for all she knows, she’s the last of her kind. By chance Analia escapes her captors, and hides herself on the merchant ship Marada, planning to get off at the very next stop.

Unfortunately for her, there is no next stop. The crew is planning a delivery that could take months, and according to a stipulation in the newly signed contract, no one is allowed on or off the ship until the package is delivered.

Review:
Demon Possession was an enjoyable read. I liked Sebastian’s tortured self-restraint, the way Anya came out of her shell and the interaction of all of the demons. Calic was a particular joy. There was a pretty little twist at the end and even though it wasn’t all that hard to see coming, it was still fun getting there.

I feel compelled to mention that I thought the way Sonya (and by extension Anya) dressed was cheesy, for two reasons. One, it was a little cliché that a ‘demon’ dressed in short, black, leather skirts, corsets and stiletto heals. Second, how is it that we could be millennia in the future, galaxies away and stripper/hooker outfits are still considered the ultimate in sexy? Really, you couldn’t come up with anything better than that? It also clashed with Anya’s innocent persona.

The ending seemed a little rushed. It felt almost like the author wrote the romance between Anya and Bastian, then wrote the lead-in for the second book and then stitched them together. There was noticeable change in pacing, and a lesser change in tone.

A number of other reviewers have made mention of poor editing. I did notice some errors, more prevalent in the last half. Oh, and if I have to read the word ‘chit’ one more time I might scream! Seriously, it’s not flattering and was used a lot. But the editing wasn’t as bad as I expected from the reviews. I have definitely read worse. Maybe I have a later edition.

I did noticed a few linguistic inconsistencies written into the story though. Anya seemed able to converse with ease, for example, but then wouldn’t know the meaning of some very simple word. (A word that would allow for a the development of a plot progressing event. They felt very much like convenient omissions.) I also wondered how Anaya knew how to read and write? I can’t imagine Darius taking the time to teach her that.

I would have happily continued the series to see how Marik fairs, even looked into buying the sequel, Demon Slave. But it was $7.99! That’s just too much for an ebook in my world. Anyone have a Kindle copy to lend?