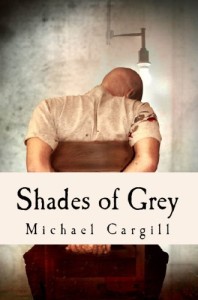 Book five of my Taking Care of My Own challenge is Michael Cargill‘s Shades of Grey. I think I picked it up from the Amazon free list. But I’ve had it so long I’m not even sure anymore.

Description from Amazon:
John is not a very nice man. He works for the government. So who has tied him to a chair and what do they want?

James is a British soldier during WWII. Tom is a young boy with a terrible secret.

Three stories. Three very different people. All of them battling to survive.

Review:
Shades of Grey consists of three short pieces, two of which I would classify as vignettes as opposed to actual stories since they seem to simply relay the events of a segment of time rather than possess any sort o beginning, middle and end. Having said that, I rather enjoyed them all, the first most of all.

I’ll admit that the writing occasionally felt a little stiff and there was a certain juvenile (or maybe just male) preoccupation with excrement jokes and sexual/masturbatory references. I would be hard pressed to call this highbrow reading material, but I never got the impression it was trying to be. I enjoyed more than I grimaced at. What more could I really ask for?