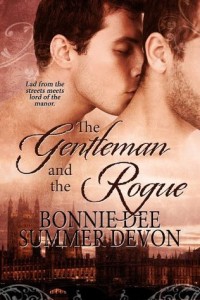 I bought a copy of The Gentleman and the Rogue, by Summer Devon & Bonnie Dee.

Description from Goodreads:
Lad from the streets meets lord of the manor. Both men’s lives will be changed forever.

When Sir Alan Watleigh goes searching for sex, he never imagines the street rat he brings home for one last bit of pleasure in his darkest hour will be the man who hauls him back from the edge of the grave. Despite his harsh life in the slums of London, Jem is a bright, cheerful young man. He’s also witty, irreverent, glib, and makes Alan laugh–a rare occasion since war time trauma and the death of his family have made the man a ghost of his former self.

A single night of meaningless sex turns into an offer of permanent employment. Jem acts as Alan’s valet, but offers him so much more than polished boots and starched cravats. Just as the men are adjusting to their new living arrangement, news about a former soldier under his command sends Sir Watleigh and Jem on the road to save a child in danger.

The journey brings them closer together as they travel from lust toward love. They rescue the girl from the clutches of an insane surgeon, who is as interested in experimenting on the vulnerable human spirit as he is on physical bodies. Alan realizes his love for Jem when he nearly loses him, but is Alan’s love strong enough to risk society discovering the truth about him? And is he strong enough to finally accept his sexual nature?

Review:
I have to admit that I’ve not historically been a fan of historical novels, though I’ve read a couple recently and I’m starting to convert. Further, I’ve never enjoyed stories based on the cliché ‘hooker with the golden heart’ trope, especially when that golden heart is healing some emotionally damaged wealthy patron, as it so often is in romance. So, this book had a lot going against it from the beginning. But I found that I enjoyed it despite containing elements I’ve traditionally dismissed as unpalatable.

The reason, I think, is that it never tried to play Jem off as a prostitute in name only. Think Julia Roberts in Pretty woman and how she was a prostitute, but shown to be so new as to be almost unspoilt. She’s a whore in name, but not practice. The authors didn’t do that here. They never tried to play Jem off as anything other than what he was and as such I was much more able to tolerate him than I would have been otherwise. Similarly, Alan wasn’t made out to be some pure soul who’d done something other than hire a man for sex. That something more developed is bonus, but the story made no attempt to dismiss Jem’s profession. I liked that.

The authors also never hid Jem’s motives behind pure good heartedness. He had ulterior motives in the beginning and by acknowledging them, the reader was more able to watch and believe as they changed to genuine affection for Alan (and visa versa).

I did think that the bad guy’s tendency to monologue his ill intentions was a little cheesy, I had a little trouble with some of the cant used (possibly because I’ve read so few historical novels) and I might have like a more obvious declaration of love from Alan, but all in all, I rather enjoyed the book.