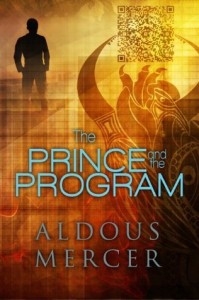 I bought a copy of Aldous Mercer‘s The Prince and the Program.

Description from Goodreads:
Mordred Pendragon, the Bastard Prince, has done a Bad Thing—again. Exiled to Canada for seven years, he has to find a job to pay his bills. For reasons he refuses to reveal, Mordred decides “Software Engineer” has a nice ring to it. And though experience with “killing the Once and Future King, my father” and “that time in feudal Japan” makes for a poor resume, he is hired by a small tech startup in Toronto.In the midst of dealing with a crippling caffeine addiction and learning C++, Mordred thinks he has finally found someone to anchor him to the world of the living: Alan, the company’s offsite lead developer. Except that Alan might not be a “living” entity at all—he may, in fact, be the world’s first strong AI. Or a demon that mistook a Windows install for the highway to Hell. Or, just maybe, the ghost of Alan Turing, currently inhabiting a laptop.Mordred’s attempts to figure out his love life are hampered by constant interference from the Inquisitors of the Securitates Arcanarum, corporate espionage, real espionage, a sysadmin bent on enslaving the world, and Marketing’s demands that Mordred ship software to the Russian Federation. Then Alan gets himself kidnapped. To save him, Mordred must ally himself with the company’s CEO, who will stop at nothing to rescue her lead developer so he can get back to work. But the Prince doesn’t just want to rescue Alan, he wants a Happily Ever After—and he will travel beyond Death itself to get one.Too bad Alan is perfectly happy as a computer.

Review:
I studied the softer sciences. I’ll admit that. But, among other things, I’ve read Surely You’re Joking, Mr. Feynman! and The Quark and the Jaguar. I had classes in the Alan Turing Building at The University of Manchester, which also hosts a yearly Cryptography Competition in the mathematician’s name. I married and share passions with a man who earned a physics degree from Imperial College, London and have a 1200 page copy of Misner, Thorne & Wheeler‘s Gravitation on my coffee table RIGHT NOW, as his light summer reading.

Heck, my own father got a physics degree on a NASA fellowship late in life (i.e. when I was old enough to discuss it with him). The man was giddy as a kid at Christmas whenever you got him on the topic of neutron physics at UTSI. We had a salvaged Georgia Tech laser in our basement for Christ’s sake. So, even though I studied Humanities, I’m no stranger to the basics of harder sciences. I’m not about to be running out and solving any formulas, but I’ve always kind of been surrounded by them.

I’ve also read most of the geektastic fair—all the LOTRs, all the Douglas Adamses, most the Pratchets, Asimovs, Gibsons and so on. I’ve even spent plenty of time with the Arthurian legends. I consider making it through The Mists of Avalon a crowning achievement. Despite all of this, I WAS NOT GEEKY OR MATHEMATICALLY INCLINED ENOUGH FOR THIS BOOK.

It is really, really funny and I got the humour, 100%. I may not have caught every joke, but I got a lot of them. I laughed a lot. I thoroughly enjoyed myself and the characters. But even as familiar as I was with things like Turing Tests, statistical game play, or open office (both Capitalised and not) torture methods, there was just always a vague hovering sensation that something was going over my head and I did not like that. I mean the book has Easter Eggs for God’s sake.

As much fun as I had with this book, I also spent a lot of it not entirely sure what exactly was happening. I found a fairly repetitive pattern of laugh, get lost, catch up, laugh, get lost, catch up, etc that left me vacillating between almost euphoric happiness and scrunched brow consternation. (Especially toward the end, when space/time I’m fairly sure folded or looped in some fashion.) So, in the end I found it a fairly so-so read. It has been suggested to me that perhaps there were a few symmetries missing in the Reimann tensor. *Shrug* maybe

It was however well written and fairly well edited. I’d still happily recommend it.

BTW, there’s an awesome review of this book over on AnnaLund2011, that’ s worth a read. It’s pretty much the review I wish I could have written.