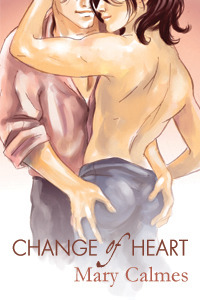 I keep hearing about Mary Calmes, so I sent out a call for lendable books. I was lucky enough to receive an ecopy of Change of Heart. (Thank you, A.)

Description from Goodreads:
As a young gay man—and a werepanther—all Jin Rayne yearns for is a normal life. Having fled his past, he wants nothing more than to start over, but Jin’s old life doesn’t want to let him go. When his travels bring him to a new city, he crosses paths with the leader of the local were-tribe. Logan Church is a shock and an enigma, and Jin fears that Logan is both the mate he fears and the love of his life. Jin doesn’t want to go back to the old ways, and mating would irrevocably tie him to them. But Jin is the mate Logan needs at his side to help him lead his tribe, and he won’t give Jin up so easily. It will take time and trust for Jin to discover the joy in belonging to Logan and how to love without restraint.

Review:  **spoiler alert**
This is the 2nd Calmes book I’ve read. So, admittedly, I don’t have a lot to judge by. Two is hardly enough to establish a trend, after all. However, I’m hoping that this was one of her earlier works, because it feels much more clumsy than Acrobat, the first of her books I got my hands on.

This book and I had issues from page one, with the whole ‘any woman out alone late at night should obviously expect to be raped (in this case gang raped)’ scene. It would be hard to get any more cliché than that.

I stuck with it, though, expecting it to get better. But I struggled. I was just so confused for so much of the beginning. Seriously, if you’re going to invent a whole new lexicon and then drop the reader in unprepared, the least you could do is include a glossary. I’m practically begging, here.

Then about the time I finally managed to figure out the foreign language of werepanter tribal hierarchies, I was struck practically dumb by the horrid implications of what a reah actually is. Really, ick.

The problem I have with the idea of a reah, or mate, as written here, is that there’s no reciprocity. It (thus, Jin) is equated to a possession, like the perfect dress. Anyone can claim it and own it. It/he has nothing of importance to contribute beyond existing for the sake of being possessed. There is no sense that, “I am your mate and you are mine.” It’s just “You are my mate.” Logan even makes Jin repeat it in an almost infinite variety of ways. “Who do you belong to?” Who owns you?” “Whose reah are you?”

I realise that this isn’t actually uncommon in PNR (m/m or het), but I don’t find it romantic in the least and it felt particularly heavy handed in this book. Here is an example passage:

“You belong to me, reah, and I will put my mark on you.”
He was right. I belonged to him…

I have two complaints here. The ‘belong to’—not belong with, but to—and the use of his title instead of his name. He’s a reah, a possession, not Jin a person. This carries through the whole book.

This is reinforced by the fact that Jin goes on and on to the Semels who turn out not to be his mate about how it’s the reah who recognises and chooses the mate, not the Semel. But when he meets Logan, it’s Logan who recognizes him as a mate before Jin does. (In fact, with a little prompting from Logan, Russ even knows before Jin does.) Because, of course, it must be the Semel/top/seme/MAN who retains the power in the relationship, especially over who is chosen and who chooses.

On that note, it’s probably worth mentioning that I didn’t find the sex sexy either. There was no finesse to it. It was all pounding and throwing and slamming. It felt much more like Logan was trying to beat the snot out of Jin than make love to him. meh

On top of my basic dislike of the semel and reah relationship, I just found a lot of bits about the plot that threw me for a loop. For example, there is a large infodrop that felt unnatural. If Crane’s been Jin’s friend since they were kids and was willing to go into exile with him, I find it hard to believe he knows none of the semel/reah stuff Jin explains to him and the reader. In fact, wouldn’t ALL werecats know this stuff, since it’s about their leaders?

Or the time a werepanter was marking Jin’s home and no one noticed. What? I mean, I can understand not seeing paw prints in the snow, but isn’t the whole point of cats urine-marking things to be smelled? So how did Jin or Crane not get a whiff of that?

Or am I really supposed to believe that Logan, a good, smart alpha would A) not know the specifics of their own laws, B) agree to something he didn’t first ensure he understood? Or here’s another, if you had been kidnapped and woke up half naked and chained in an S&M chamber, then escaped the back room to find yourself in a dance club. Would you stop and dance with some random coworkers in that same club? Seriously? WTF? Keep going idiot.

Or how about this: given that reahs have ALWAYS been female and the male-centic “it’s the place of all men to protect women” (and by extension the place of women to be protected by men) stance of the shifter packs, the Law of Bast declaring the reah the semel’s protector makes no sense at all. To call it a convenient plot device is an understatement.

Then there was the time that two individuals challenged eachother to a duel, of sorts. All very formal, with lots of official rules and named laws relating to it, etc. So, I’m still lost about why noone was upset or why Logan wasn’t forced to forfeit the match when Jin very clearly broke the rules. (The rules Logan had already broken, if I’m being pedantic.)

One of the biggest issues for me though was that the author seemed to want to have her cake and eat it too. Jin is almost universally worshipped by every shifter he meets (really, it’s surreal). A reah is a blessing and everyone is just praying their semel finds his one DESTINED, UNDENIABLE mate (when only ~1/1000 actually do). But then he is also reviled, exiled and hated for being a man and both Jin and Logan’s family try to deny him and their union. Surely, it can’t go both ways.

There’s all this overlap between characters and opinions, so it all comes across as all flippy-floppy. One minute Calmes is going on about how awe inspiring meeting a reah is and how much stronger a semel and a tribe will be for finding one. Then next characters are swearing him off as an abomination again. Back and forwards. I imagine this was supposed to create a bit of tension as inherent prejudices are confronted, but it just felt really, really inconsistent instead.

So I was confused by a number of smallish things, no real big deal. But causing me to almost choke on all of the love and good intentions toward then end was just too much for me. I’m not a big hearts and flowers fan to start with. But when it’s done with super cheesy dialogue…seriously, I’m dying over here.

The whole ‘turn your enemy to your alley via mercy in defeat’ was A) gagworthy and B) unrealistic, considering how egotistical and evil Domin had been previously. Am I honestly supposed to believe he’d instantly give up his pride and birthright to become an honorable man and servant?

Oh god, then all the praise and begging started:

“You saved your mate…but then helped those that tried to kill him. You are a gift, reah!”

Stay, stay, stay. Like he’s the freakin’ Messiah or something. gag, gag, gag. Seriously, GAG! Plus, super cheesy…and it went on forever.

Then the Too Stupid to Live Sh*t started, wherein Jin ran away because Logan betrayed him by incapacitating him in order to protect him. Jin even managed to compare this well-intended “betrayal” to his family trying to beat him to death and abandoning him for dead. Um…really not the same thing and the kind of TSTL logic that only makes sense in novels. I was not pleased

So, I’ve ranted a bit. I wasn’t captivated by this novel. I think I could have been if things had been a bit different. I can definitely see the formula other readers have comments on about Calmes books (even only reading the two so far) but this one was a fail for me, largely based on personal preferences. Part of me says, ‘Let it go. You’re taking it all too seriously.’ But another part of me just plain doesn’t like what it doesn’t like.