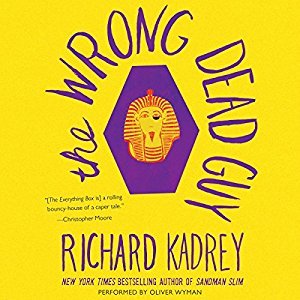 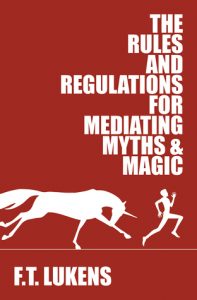 I received a copy of The Rules and Regulations for Mediating Myths & Magic, by F.T. Lukens through Netgalley.

Description from Goodreads:
Desperate to pay for college, Bridger Whitt is willing to overlook the peculiarities of his new job—entering via the roof, the weird stacks of old books and even older scrolls, the seemingly incorporeal voices he hears from time to time—but it’s pretty hard to ignore being pulled under Lake Michigan by… mermaids? Worse yet, this happens in front of his new crush, Leo, the dreamy football star who just moved to town.

When he discovers his eccentric employer Pavel Chudinov is an intermediary between the human world and its myths, Bridger is plunged into a world of pixies, werewolves, and Sasquatch. The realm of myths and magic is growing increasingly unstable, and it is up to Bridger to ascertain the cause of the chaos, eliminate the problem, and help his boss keep the real world from finding the world of myths.

Review:
Super cute, I mean it’s a little ridiculous too, but utterly adorable. I thought the characters had realistic young adult, coming into themselves sort of problems that they handled well. I thought the couple was too cute for words. I liked the side characters. I thought the fantasy aspect of the book was engaging and interesting. And I thought it was funny. Granted, some of the humor was of the slapstick, silly sort. But still I enjoyed it. A rare, all around win for me.

On a side note, if you hurry, there’s even a giveaway to win a copy. It ends Sept. 30th. 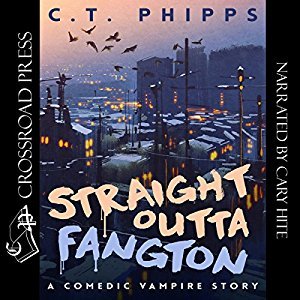 Description from Goodreads:
Peter Stone is a poor black vampire who is wondering where his nightclub, mansion, and sports car is. Instead, he is working a minimum wage job during the night shift as being a vampire isn’t all that impressive in a world where they’ve come out to mortals.

Exiled from the rich and powerful undead in New Detroit, he is forced to go back when someone dumps a newly-transformed vampire in the bathroom of his gas station’s store. This gets him fangs-deep in a plot of vampire hunters, supernatural revolutionaries, and a millennium-old French knight determined to wipe out the supernatural.

Sometimes, it just doesn’t pay to get out of the coffin.

Review:
This was really quite good; funny in a witty, sarcastic way, with a widely diverse cast and entertaining plot. Cary Hite did a wonderful job with the narration, which only enhanced my enjoyment of the book.

Going in, I was a bit iffy about the main character being a black vampire and joking about this at times, with the author being white. There are jokes people can make about themselves and their own group that outsiders really just shouldn’t. But I never felt Phipps was irreverent or insulting about his characters in any way. Peter and crew were marvelous!

I thought a lot of the geekdom references were funny, but I also thought they went a little overboard; too much of a good thing, if you will. Abut all in all, however, I loved this and hope for more.