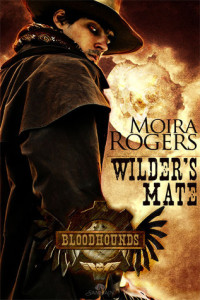 I grabbed a copy of Wilder’s Mate, by Moira Rogers from the Amazon free list. At the time of posting it was still free.

Description from Goodreads:
Wilder Harding is a bloodhound, created by the Guild to hunt down and kill vampires on America’s frontier. His enhanced abilities come with a high price: on the full moon, he becomes capable of savagery beyond telling, while the new moon brings a sexual hunger that borders on madness.

Rescuing a weapons inventor from undead kidnappers is just another assignment, though one with an added complication—keeping his hands off the man’s pretty young apprentice, who insists on tagging along.

At odds with polite society, Satira’s only constant has been the aging weapons inventor who treats her like a daughter. She isn’t going to trust Wilder with Nathaniel’s life, not when the Guild might decide the old man isn’t worth saving. Besides, if there’s one thing she’s learned, it’s that brains are more important than brawn.

As the search stretches far longer than Wilder planned, he finds himself fighting against time. If Satira is still at his side when the new moon comes, nothing will stop him from claiming her. Worse, she seems all too willing. If their passion unlocks the beast inside, no one will be safe. Not even the man they’re fighting to save.

Review: (spoiler)
This story had an interesting premise and if it had another 100 pages to develop it, it might have been a good book. Everything in it happens at almost Mach speed, leaving no time for world-building, character development, back story, climbing tension, or (most importantly) believable growth of feelings and emotions.

Wilder and Satira meet. Within seconds they’re throwing insults and sexual innuendo at one another. Within half an hour they’re lusting after each-other. By the end of the afternoon they’re already progressing to suggestive touching. By the end of the next day, they’re having sex at every available moment and by the end of a week (probably less, but a few days at least) they’re madly in love and happily mated for life. At no point does the reader feel their relationship progressing. Wilder feels like he’d bed any woman available (and at the new moon, he probably would) and Satira feels like she’s out to bag herself a bloodhound to protect and care for her. But somehow we’re not supposed to see it that way, but as true lurvvve. Meh.

I have no idea how vampires came to inhabit the world, what exactly a bloodhound is, what the point of their mating frenzy at the new moon is (since it’s stated that it isn’t procreation), etc. There is no depth to the world.

I was also disgusted by the cliche use of gender roles. Bloodhounds and vampires were solely male. Vampires apparently only ‘fed’ (implying both blood and sex) on women. They enslaved men as ghouls to work for them. Women couldn’t be educated or hold careers. Thus, apparently the only purpose of females was, to use the exact words of the book, “those whose time was rented, and those who were outright owned.” I presume that included the married. And this is reinforced when the first major act of the book is for Wilder to take Satira—a smart, capable, spit-fire of a woman-to a whore house to be tarted up before they entered the badlands (i.e. the land of the male predators). Meh. No, that’s not strong enough. MEH!

I did appreciate that Satira was sexually aware and more than happy to go after what she wanted and even vocalise it. She was no shrinking, virginal violet. You don’t come across too many of those. It’s just unfortunate that she also came across as so desperate.

Even the rescue was solved with unbelievable ease. They camped out in a hotel for a few days, showing Satira off (to what point, I don’t actually know) got a lead immediately, had a quick break for 3 days of non-stop sex and then marched into town, walked through an unlocked door, for Christ’s sake, and defeated the baddie in about 15 minutes. What? Meh. The writing itself was fine, but I’ll be passing on anymore of this series, thank you very much.