I borrowed and audio copy of Shannon Mayer‘s Venom & Vanilla (narrated by Saskia Maarleveld) through Amazon Prime. (I’ve just realized I can do this for audio books!)

Successful Seattle baker Alena Budrene doesn’t want to die. But when she’s infected with a lethal virus spread by supernatural beings, her only chance for recovery is to make a deal with the devil—or in this case, a warlock.

Though he saves her life, it looks nothing like the life she once knew—and neither does she. Alena is a new breed of “Supe” no one has ever seen before. Even the supernatural police don’t know what she is. Now exiled to the northern side of the Wall, which marks the divide between humans and Supes, Alena is thrust into a dark and magical new world.

But just as she begins to adjust to all things supernatural, she realizes that her transformation is the least of her worries—and it was no accident. She was chosen…to be killed by a Greek hero trying to make a name for himself once more.

Alena was brought up to be subservient, preferring creating to fighting, and vanilla and honey to blood. But that was then. Now, to survive, she must stand up for herself—and this time she’s got fangs. But will she be ready to use them?

I was not impressed. Another reviewer, who is on Mayer’s street team, says the author calls this an urban fantasy parody. That makes the whole ridiculous thing a little easier to swallow. But it still just isn’t very good. Maybe it needed to be more or less of what it is. More parody, if a parody or less parody-like if a serious novel. I don’t know. Maybe an author who writes in the urban fantasy genre shouldn’t be writing parodies of it unless they highlight what it is in big neon letters. Either way, almost everything about the book irritated me.

First and foremost the stupid non-cursing grated like sandpaper. Hearing an adult woman, who is supposed to be kicking ass and taking names call someone a donkey’s butthole instead of a jackass was not cute. It was super irritating. Similarly, wanna RUIN any sexual tension you have going on? Throw in a “He grabbed my bumm.”

Mostly though Alena was just too perfect. She wakes up with the perfect body. She’s loyal and sacrificing. She makes allies out of enemies with nothing but her sass. She defeats her foes with aplomb. She saves the day and gets the guy (if she wants him). And while all of that sounds fine, to have it all in one character is over-reaching and moves right into underdeveloped and unbelievable.

All in all, this was a big old bust for me. No thank you.

It’s mid-December and, like every December in recent memory, I have reached this point in the year and have yet to read a Q, U or X book for my author-alphabet-challenge. *Cue panic.* I did try and read Q book earlier, but ended up DNFing it for being horrible. So, I was officially without a Q book and the local library didn’t have a single one that interested me on hand. (Interest me can be defined a in the sci-fi/fantasy section.) On a whim, I thought to check the audio books. I was literally walking by the shelf on my way to the door after discovering nothing in the fantasy section. Here, I came across a light historical paranormal title by Amanda Quick, Crystal Gardens (narrated by Justine Eyre). SOLD. I didn’t even fully read the description before whisking it away to the check-out deck and home with me.

Evangeline Ames has rented a country cottage far from the London streets where she was recently attacked. Fascinated by the paranormal energy of nearby Crystal
Gardens, she finds pleasure in sneaking past the wall to explore the grounds. And when her life is threatened again, she instinctively goes to the gardens for safety.

Lucas Sebastian has never been one to ignore a lady in danger, even if she is trespassing on his property. Quickly disposing of her would-be assassin, he insists they keep the matter private. There are rumors enough already, about treasure buried under his garden, and occult botanical experiments performed by his uncle—who died of mysterious causes. With Evangeline’s skill for detection, and Lucas’s sense of the criminal mind, they soon discover that they have a common enemy. And as the energy emanating from Crystal Gardens intensifies, they realize that to survive they must unearth what has been buried for too long.

Considering I picked this book up with a very vague idea of what it might be about, I ended it happily enough. It’s light and fluffy, and so long as I don’t think too deeply about how rapidly people fell in love and made drastic life decisions, I have few complaints. I did find Evangeline’s determination to not see that Lucas obviously intended to marry her for real annoying. And considering that one of the things I liked best about the book is that the couple spoke plainly to one another, avoiding any unnecessary, drama-inducing misunderstandings, this irked me. But for a quick, cotton candy read it was a success. As was Justine Eyre’s performance. 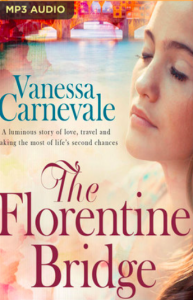 I won an MP3 copy of The Florentine Bridge

, by Vanessa Carnevale through Goodreads.

Description:
Young Australian artist Mia Moretti has been cancer free for nine months. But her battle with the illness has taken its toll, leaving her depressed and tormented by overwhelming fears. What’s more, she can’t seem to paint anymore. Mia needs a fresh start so when a surprise opportunity to travel to Tuscany presents itself, she takes it. With any luck, this trip will help her find whatever it is she needs to open her heart and start painting again.

What she doesn’t count on is meeting Luca, a handsome Italian mechanic. With his smile, his warmth and his inspirational outlook on all the good things life has to offer, he sweeps her off her feet. As Mia slowly lets down her walls and allows Luca in, her passion for life is reignited and her new perspective begins to inspire her art. But just when she’s ready to let go of her past, will a tragedy threaten her new life with Luca?

Review:
This was really sweet, with an uplifting theme and good writing. And if that’s all you’re looking for, and you’re not too concerned with details, grab it, because it is good. But details often catch me out and some of them irritated me with The Florentine Bridge. For example, Mia is supposed to be 19. And yes, she had a traumatic experience and might have matured a bit more than the average teen. But honestly she reads like a 30-year-old. Some of it is cultural. For example, she goes out and blithely orders wine with dinner. As an American reader that’s problematic, as the legal drinking age here is 21. Mia wouldn’t be able to drink in public. So this frequently pulled me out of the story. (Of course I understood she was in Italy, with different rules, it just always caught my attention.) But some of it wasn’t. Mia was still 19 and the classy dates she and Luka went on were not the dates of a 19-year-old. Almost nothing about Mia, except for her relationship with her parents, was teen-like.

Then there was the insta-love. Mia and Luka had a deep meaningful relationship from the moment they met. Some of it was explained, but not enough. This isn’t a fantasy of any sort, so I couldn’t figure out what their LOVE was based on so quickly.