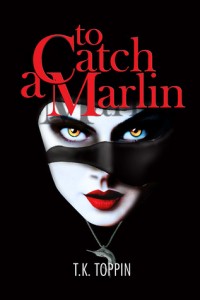 I grabbed T.K. Toppin‘s To Catch a Marlin from the Amazon KDP list.

Description from Goodreads:
In the tail end of the 24th Century, Special Inspector Michael Pedroni pursues a beautiful and elusive vigilante, Jax Marlin, in a wild cat and mouse chase that will take him from Earth to the Bacchus Dome and beyond.

Jax Marlin is not your average criminal; she seeks out evil-doers and law-breakers, doling out justice in whatever way she sees fit. But lately, she finds she’s been gift-wrapping criminals specially for her favorite copper.

Four of the world’s leading criminals are determined to form an alliance. Jax is determined to stop them. Hot on her heels, Inspector Pedroni finds himself questioning the difference, if any, between her justice and his. More than that, he wonders why, when he’d had her in his grasp, he was unable to slap on the restraints and bring her in.

Both want the same thing–to stop criminals. But the growing attraction each has toward the other becomes a dangerous hindrance.

Review:
First off, I love this cover. Props to whomever designed it. The story’s pretty good too. The first 10-15% felt like it just rehashed the book’s description repeatedly, but after that the action seemed to pick up. Pedroni and Marlin’s cat and mouse game was amusing, as was the way Marlin managed to stay one step ahead of Pedroni but was never too far away. Her affection for him softened her personality and made it a lot easier to relate to her. Without it she would have felt too cold to like, too mechanised. She was pretty much a good at everything, fighting, tech, disguise, etc. I was left wondering exactly how she became so awesome. The answer was hinted at, but I still would have liked to know how exactly that came about.

Pedroni, was wonderful. He’s the epitome of ‘good cop.’ He reminded me a little bit of Asimov’s Elijah Baley, but that might just be an effect of a New York detective in space. I enjoyed watching him struggle with his role as the Special Investigator in charge of catching Marlin and his growing feelings for her, as well as his increasing understanding of her motives. I really wanted them to have their happily ever after, but I’m happy with how the book ended. Anything more would have been unrealistic.

All in all, I have very few complaints. It was a sweet story, with some good fight scenes and truly evil baddies.

Description from Goodreads:
Surrounded by magical enemies with an intimate knowledge of her abilities, a matchmaking witch of the highest rank must fulfill both her duty to her coven and her desire for a love of her own, even if the two goals collide.

Maeve Lovejoy has always been good at her job even though her service comes at such a high cost. Though her matchmaking abilities are stronger than ever, the most potent in any coven’s recorded history, her introduction to Aaron has confused matters. Believing she’s found a partner who can love her and allow her to continue practicing her arts, she shares her secrets with him. Is it a coincidence that soon after, that same information is used to locate and murder Maeve’s matches? When Aaron goes missing, is it because he is a member of a rival black magic sect or because he has fallen victim?

Slightly spoilerish review:
Ishtar Bound was an interesting read. It revolves around a coven of witches who use the energy created during sex as the catalyst for their power. The main character, Maeve, is responsible for creating the matched couples who will produce that power. The problem is that someone seems to be killing off her matches in an attempt to cause something horrible.

There is a pretty good mystery here. Gibson throws out a couple red herring so that the bad guy isn’t completely obvious and the characters are engaging. A lot was left unexplained though. Who are the Guardians (I know what, but who)? What is the role of The One and how does she relate to Samsiel? (I understood the prophecy, but I could have done with a bit more solid info.) How did Natalia and, by extension Maeve, come to the Daughers and how come the boys (JD, Lucas & Aaron) were so willing to accept the women’s powers, was this not otherwise our normal society?

For the record, IMO despite it’s description on Amazon (Paranormal Erotic Romance/Urban Fantasy), I would consider this a paranormal romance at most. The focus is definitely on romance, not sex. There just isn’t enough sex in it to be considered erotica. There is only one real sex scene, a few fondling scenes and a couple almost rapes. (That sounds like a lot, but it’s not in context.) The author has a strange tendency to combine knives and sex which might be considered a little farther out than normal though. This actually bothered me a little. I would expect the bad guy to pull knives, but even the good guy/romantic interest reminded Maeve he had a pocket knife between her legs at one point and then pulled a butcher knife on her at another time to keep her with him against her will, or at least her better judgement. He started to feel just a little crazy himself. I think it was supposed to feel desperate and it did that too, but definitely unstable.

All-in-all it was an enjoyable read. It felt like it wrapped up a little too easily, but I’ve decided that this is because it is the first in the series and there is more to come. More importantly, it did actually end. The last chapter was definitely an opener for the next book, but I didn’t finish feeling like the story didn’t end. 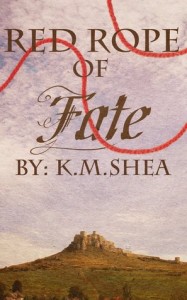 I grabbed Red Rope of Fate, by K.M. Shea, from the Amazon KDP list. After finishing The Weight of Blood, which was quite heavy, I needed something light and fluffy to make myself feel better. It did the trick.

Description from Goodreads:
In the epic stories falling in love is often described as a beautiful, wonderful experience. Tari finds it to be life threatening, embarrassing, and nothing but heartache.

When Tari, an elf, is selected to be bound to Captain Arion, a human military officer, in a ceremony designed to promote friendship between their countries it is discovered that the two can communicate with each other in spite of the language barrier. Not everyone is supportive of the change Tari and Arion symbolize, so in addition to attending evening teas and royal luncheons Tari and Arion dodge kidnapping attempts and blackmail plots crafted by powerful political figures.

In spite of the court intrigue, Tari is dumbfounded when she realizes she has fallen in love with Arion, who has the emotional capabilities of a rock. As both human and elf society dictate that an elf and a human can never be together, Tari must conceal her feelings. Unfortunately the taciturn Arion is watchful and attentive to Tari’s well being, constantly pushing her to her limits with his loyalty, friendship, and dreadfully informal habit of touching her.

If Tari and Arion survive, their tumultuous relationship will either strengthen their countries’ alliance, or cripple the human courts of nobility. The deciding factor will be Arion, and his indecipherable feelings for Tari.

Review:
Ok, so that was just plain sweet…exactly what I was looking for. Even before any of the romance emerged Tari and Arion’s interactions were a joy to behold. They both had a certain dry wit about them that I appreciated. I did wonder that Tari could remain quite sooooo oblivious for quite soooo long and how exactly she managed to keep her secret from Arion. But it was still fun.

The two kings had a lot of personality for side characters. The Seer, the soldiers, and the family were engaging and both Tari and Arion came out with some really funny one liners. There was the occasional cultural mishap, ok the whole latter half of the romance sort of hinged on one, but it still made me smile. Then there was Arion’s additional confession. That was worth reading the book for all on its own.

The mystery, though secondary to the plot really, was interesting. As was the true role of the Evening Stars. Though I could take issue with the inference that women, even highly trained and skilled women don’t have the heart for real battle, I think I’ll let it pass. You do see the end coming from a mile away but that only heightens the anticipation. You know that HEA is on the horizon and you just can’t wait.

It’s also worth mentioning that this is a standalone book. These feel like they’re getting rarer these days, so I’m thrilled to come across one. I have another of Ms. Shea’s book on my TBR and I’ll be keeping my eye open for more. She’s definitely made it on my radar.

On a side note Ms. Shea has a promotion running on her blog in which anyone who writes a legitimate Amazon review and then emails it to her can get an additional chapter to the book. Apparently it falls outside of the timeline of the book, so really is just bonus.