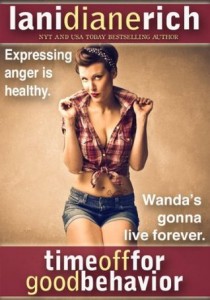 I grabbed Lani Diane Rich‘s novel Time Off for Good Behavior from the Amazon KDP list.

For Wanda Lane, life has been one long string of screw-ups. Her abusive ex-husband keeps threatening to kill her, she just lost her crappy job, and a head injury (sustained while diving off the witness stand to attack an obnoxious attorney) has left her hearing phantom music no one else can hear. It isn’t until she hits the rock bottom of her bottle of scotch that she begins to wonder if maybe — just maybe — the problem is her.

On her pothole-ridden path to becoming a decent human being, she makes friends with Elizabeth, a single mother looking for her own solid ground; Father Gregory, the patient priest who counsels Wanda, even though she’s not technically Catholic; and Walter, a Jimmy-Stewart-ish lawyer who is smart, sexy and single… and so far out of Wanda’s league that she thinks he must have been sent from God as one last punishment for her past transgressions. Can an angry, lost woman find her way back from failure, or are second chances the stuff of myth?

You may want to move out of her way

Review:
I have to say I really enjoyed Wanda and all of her Idiosyncrasies. Honestly, the woman is just a little crazy for most of the book and the situations she finds herself in are patently absurd. So you do just kind of have to role with it to a certain extent. I think her terse relationship with Father Hard-Ass is my favourite. There is so much witty sarcasm, what someone else called snark, in this book that I couldn’t help but be constantly amused.

True conversation:
My husband sauntered into the living-room chuckling.
Me: “What?”
Him: “Nothing. I’m just laughing at you sitting there grinning to yourself.”
Me (waving my Kindle at him indignantly): “But it’s funny.”
Him (shaking his head knowingly): “I’m sure it is.”
Me (lovingly to his departing back): “Bastard”

Yep, that’s how it goes. Wanda’s journey of self-discovery is one I think a lot of women can relate to. If we’re all as lucky as her and can finally come to not only understand but accept ourselves life will surely improve. Of course she is helped along by a whole cadre of new friends and one AMAZING new love interest. Yes, Walter (aka Jimmy Stewart) is just far too good to be true. So of course it’s impossible not to love him. It only took me an evening to read the book and I’m glad I gave it the time. 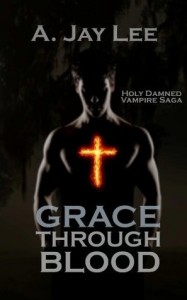 I grabbed A. Jay Lee‘s vampire novel, Grace Through Blood, from the Amazon KDP list.

Description from Goodreads:
Welcome to the Nightlife of the Palmetto City.

With an Arch-Demon masking itself as a serial killer, a NCSI agent hounding a Navy SEAL for crimes he didn’t commit, a clan of lycanthropes living secretly among the masses, and overseeing it all a congregation of pious vampires believing that they have ‘Divine Right’ over the city, the nights were wild enough. Add in one young woman with special abilities and in possession of a holy relic that threatens the existence of all vampires, and the stage is set for a dangerous mix of action and steamy sex over the course of hot, humid nights in this ‘Holy City’.

Jamie Grace wants nothing more than to lead a normal life, but her ability to see a person’s soul through an aura that radiates through every living person makes this wish impossible. Soon after arriving in her new home of Charleston, South Carolina, she encounters what appear to be humans that have no aura.

Jamie soon learns that the mysterious creatures are vicars of the Sanctum Damnatus and unfortunately they are as troubled about her existence as she is with theirs. Complications ensue when the vampire that has been sent to kill Jamie falls in love with her. With her would-be assassin turned protector, Jamie finds herself on the run from both the Damnatus and an Arch-Demon from Hell. Tangled with Christian dogma and biblical lore and set in this historic coastal Southern city, Jamie must find out whom she can trust and begin the journey of learning what she truly is in this first novel of the Holy Damned Saga.

Review:
Grace Through Blood had a really interesting premise in which vampires fill a specific role in God’s divine plan for the salvation of mankind. That’s all well and good. Here’s the thing for me though. There is a difference between using the Cristian mythology as plot material, and actual religious fiction. Dan Brown writes mysteries using Biblical material, but I don’t think many people would call his work ‘religious.’ I quite enjoy one, but not the other.

Unfortunately for me, Grace Through Blood turned out to be Cristian fiction, which I can’t say I was expecting. That left me cold. I just don’t enjoy being preached to in the books I read for fun. I realise some people will think this is a ringing endorsement for the book. There is a large Christian market out there. I’m just not part of it. I finished the book though. And when God wasn’t saving the pure souls of those who called on him in blatant scenes of proselytism it was pretty good.

It did tend to drag a bit and felt a little too long. I think the sex scenes could have been nixed to address this. This would have tightened the narrative up a bit and shortened the novel as a whole. But they also just felt out of place IMO. I read a decent amount of sexy PNR. I even enjoy the occasional spot of erotica now and again, so I have no problem with sex in my fiction. However, in this particular case I don’t think it contributed to the plot, was contrary to the tone of the rest of the novel and therefore distracting.

I assume there is more to come in this series as a number of heavy hints were dropped about the lineage of both Jamie and Grant, but no answers provided. I kind of wanted to scream about that, but oh well. If you enjoy vampires and christian fiction this is an interesting blending of the two. Lee does a good job of turning a number of Biblical passages to support the new vampire mythos and the writing itself is pretty good. I just probably wouldn’t have picked it up in the first place if I had a better understanding of what type of book it is. 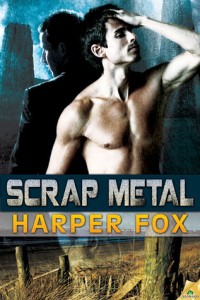 Description from Goodreads:
One year ago, before Fate took a wrecking ball to his life, Nichol was happily working on his doctorate in linguistics. Now he’s hip deep in sheep, mud and collies. His late brother and mother had been well suited to life on Seacliff Farm. Nichol? Not so much.

As lambing season progresses in the teeth of an icy north wind, the last straw is the intruder Nichol catches in the barn. He says his name is Cam, and he’s on the run from a Glasgow gang. Something about the young man’s tired resignation touches Nichol deeply, and instead of giving him the business end of a shotgun, he offers Cam a blanket and a place to stay.

Somehow, Cam quickly charms his way through Nichol’s defenses and into his heart. Even his grandfather takes to the cheeky city boy, whose hard work and good head for figures help set the farm back on its feet.

As the cold Scottish springtime melts into summer, Nichol finds himself falling in love. When tragedy strikes, Cam’s resolutely held secret is finally revealed and Nichol must face the truth. He’s given his heart away, and it’s time to pay the price.

Review:
This was just incredibly sweet, bitter-sweet I’ll grant you, but sweet. So many characters in this book were in devastating emotional pain for one reason or another and it was really touching the way they all managed to heal one another with nothing more than their mere presence and natural selves. Even old curmudgeons like Harry thawed a little bit before the end. Old hurts were forgiven and fresh ones avoided by new understanding.

The use of Gaelic, though occasionally distracting if not immediately translated, paired with the incredibly evocative description of the landscape gave the book a lot of atmosphere. The occasional Highland ghost didn’t seem out of place at all. Nor did the portent of change the animals tended to represent. It all contributed to the rich tapestry of superstitions and culture that was Arron island life. (And gawd do I ever want to visit now.)

The writing in very descriptive and really quite poignant. I didn’t so much read this book as feel it. I laughed, I teared up, I held my breath and eventually heaved a sigh of relief. The actual ending was a little too sappy for me, but the general ending I loved. I will definitely be seeking out more of Ms. Fox’s writing.