I bought a copy of Trust the Focus and Focus on Me (book 1 & 2 of the In Focus series), by Megan Erickson. 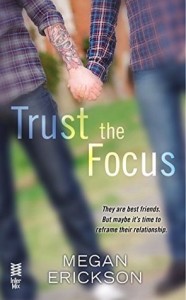 Description from Goodreads:
With his college graduation gown expertly pitched into the trash, Justin Akron is ready for the road trip he planned with his best friend Landry— and ready for one last summer of escape from his mother’s controlling grip. Climbing into the Winnebago his father left him, they set out across America in search of the sites his father had captured through the lens of his Nikon.

As an aspiring photographer, Justin can think of no better way to honor his father’s memory than to scatter his ashes at the sites he held sacred. And there’s no one Justin would rather share the experience with more than Landry.

But Justin knows he can’t escape forever. Eventually he’ll have to return home and join his mother’s Senate campaign. Nor can he escape the truth of who he is, and the fact that he’s in love with his out-and-proud travel companion.

Admitting what he wants could hurt his mother’s conservative political career. But with every click of his shutter and every sprinkle of ash, Justin can’t resist Landry’s pull. And when the truth comes into focus, neither is prepared for the secrets the other is hiding.

Review:
A sweet, if angsty, story that I generally enjoyed. I thought both Justin and Landry were fun characters to get to know and their romance felt real. (As did Justin’s difficult position.) I even enjoyed their tentative sex. I’m not generally one for ‘learner sex,’ but, again, I thought it was sweet.

I did get a little board with the ‘adventures,’ though I completely understood the purpose they served, I thought the blog posts felt a little gimmicky, and I thought that the ‘evil mother’ was a little cliché, especially given how easily her mind seemed to be changed in the end.

But my overall response to the book was, “Well, that was cute.” I’m looking forward to reading more of Erickson’s work. 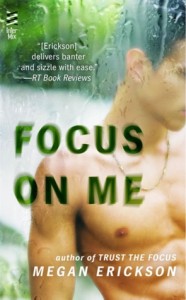 Description from Goodreads:
Colin Hartman can now add college to his list of failures. On the coast-to-coast trek home from California, Colin stops at a gas station in the Nevada desert, and can’t help noticing the guy in tight jeans looking like he just stepped off a catwalk. When he realizes Catwalk is stranded, Colin offers a ride.

Riley only intended to take a short ride in Colin’s Jeep to the Grand Canyon. But one detour leads to another until they finally find themselves tumbling into bed together. However there are shadows in Riley’s eyes that hide a troubled past. And when those shadows threaten to bury the man whom Colin has fallen in love with, he vows to get Riley the help he needs. For once in his life, quitting isn’t an option…

Another sweet story from Megan Erickson. The writing was wonderful and I liked the characters, but this wasn’t really my style. I sometimes have an issue with encountering mentally ill characters in books. Now, I love diverse representation and mental illness is real and should be represented. I’m not saying it shouldn’t. Nor am I saying it should somehow be exempt from being usable material for fiction; or even that I won’t enjoy a book with mental illness as a theme. But sometimes, sometimes I feel like it shows up as a prop or that authors write books involving it so that they can be congratulated on their inclusive, acceptance of those living with mental illness rather than because they have a story to tell that happens to have a character with an illness.

I don’t know that Erickson was doing this. I’m not gonna go guessing her motives about writing it. But I know that as I read the book, as much as I like Colin and Riley (and I did, Colin especially), I thought Riley’s emotional collapse was so abrupt and Colin’s reaction to it so stubbornly solid that I was left wondering if I should be taking more from the enjoyment of the story or from the lesson on the importance of getting appropriate help. It wasn’t quite PSA level, but… Now, I did like that Erickson didn’t have love fix everyone’s problems. I appreciated that the men acknowledged that sometimes love really isn’t enough.

And this is probably just my issue, what I am conditioned to feel when reading books like this one. IDK. Because, like I said, it was well written and I did like the characters. I also liked how the book tied into the previous one, while still remaining a stand alone title (though, like the previous books and the blogs, I thought the emails felt gimmicky, even if it’s the only POV you get from Riley). I’ll definitely be reading more Erickson books. 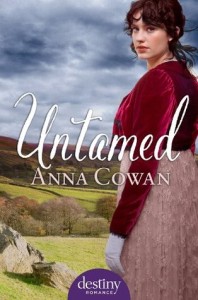 I bought an ecopy of Untamed, by Anna Cowan.

Description from Goodreads:
Outspoken and opinionated, Katherine Sutherland is ill at ease amongst the fine ladies of Regency London. She is more familiar with farmers and her blunt opinions and rough manners offend polite society. Yet when she hears the scandalous rumours involving her sister and the seductive Duke of Darlington, the fiercely loyal Katherine vows to save her sister’s marriage – whatever the cost.

Intrigued by Katherine’s interference in his affairs, the manipulative Duke is soon fascinated. He engages in a daring deception and follows her back to her country home. Here, their intense connection shocks them both. But the Duke’s games have dangerous consequences, and the potential to throw both their lives into chaos…

Review:
Oh so marvelous! I was recently bemoaning the fact that I am so often disappointed in het romance book. In fact, I’ve largely given up reading them. Then someone described this book to me and I thought, ‘well I have to try that don’t I?’

But before I do, I want to address that cover. It’s a perfectly fine cover, but it doesn’t give you a clue to the raucous characters you will find within it.  I’d never have picked it up had I not been given a very strong recommendation.

Ok, with that out of the way, I loved Kit and the Duke. I just loved them. I loved the way she was so strong and he was so fragile. I just loved it. Now, another reviewer that I respect spoke to the fact that this is only just a reversal of male/female characteristics, not a true subversion of them. And I agree whole-heartedly. Really, it just highlights them in relief, which is still reinforcing them in a sense. But, experientially, I so enjoyed reading it that I’m going to overlook this fact.

There was also a certain intensity to the writing that I just wanted to roll around in. It was lush, even if it did occasionally cut into clarity. Again, just the experience of submerging myself in it was diabolically wonderful.

And (mild spoiler) as much as I loved that the happy ending came about almost entirely at the active, purposeful hand of Kit, I did think it was all a little too saccharinely perfect. She got her man, her title, her riches and her revenge. It was too much. But I’m still going to overlook that fact simply because I otherwise loved the book so much. 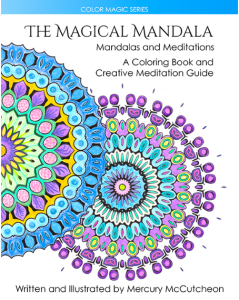 I received a PDF copy of The Magical Mandala: Coloring Book and Creative Meditation Guide from author/illustrator, Mercury McClutheon. I’m not entirely sure how to review a coloring book, but I figure pictures are a must.

Description from Amazon:
Welcome to The Magical Mandala! This book contains 50 beautiful mandalas ready to transport your mind to the relaxing world of coloring magic. The mandalas contained in this book welcome all skill levels. Whether you just want to play with color palettes or embellish with swirls and shading, these mandalas provide a range from plain and simple to difficult and challenging. This book also includes a helpful color association reference guide and four powerful and fun meditations. The meditations are designed to help you use your mandalas for awakening powerful insights, stimulating spiritual growth, and magical manifestation.

And just for fun, here’s the book trailer:

Review:
I’m not gonna lie; when I came across an offer for a PDF or mobi copy of a coloring book I was baffled. I mean, it doesn’t really seem the right format, after all. And that same thought follows into, ‘Why does Amazon offer a Kindle copy?’ But whatever. I happen to love mandalas and I own a printer, so I gave it a go.

The first third of the book is explanation and discussion of how to use mandalas in meditation and how coloring can contribute to it, as well as a meanings-of-color chart. If this is the sort of thing you’re interested in, you’ll probably enjoy the affirmations and instructions. It was easily understandable and not too mystically off-putting. 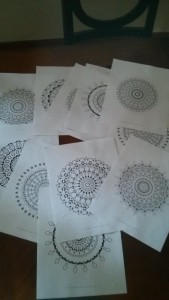 Then there are fifty mandalas of varying difficulties. Some with very small sections, that I would highly recommend keeping a pencil sharpener close for and can tell you a crayon would be too big to color with and some that by almost five-year-old easily challenged.

I read the introduction, randomly selected a half dozen or so to print (thought I looked at them all) and then my two daughters (~5 & 8), my two mother-in-laws (both mid-sixties) and I (late 30s) sat down to get our zen on. 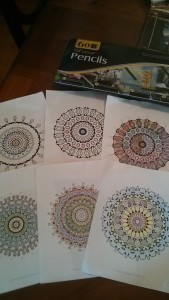 I can’t claim to have tried the formal meditations, but I did  find it calming to simply sit and color. It’s something I loved as a child, but coloring in Princess Disney Whoever doesn’t appeal in the least. This allowed for adult arty expression and I sank happily into the task. (That’s mine in the bottom left of the picture.)

I appreciate the time and effort McClutheon obviously put into this project and if you’re looking to get in on the new grown-up coloring trend (this really is apparently a thing) I have no hesitation about recommending this one.