I purchased a copy Alexis’ Calder‘s Wolf Marked in order to read it as part of my Wolf Marked Reading Challenge. You see, three books titled Wolf Marked promoed on Sadie’s Spotlight within a very short time of one another. It amused me so much that I decided to read and review all three of them. Thus a mini reading challenge was born. This is the second Wolf Marked I’ve read. The first was by Veronica Douglas and the last will be Harper A. Brooks.

Knowing it ends on a cliffhanger, I considered holding off on reading this until I had book two in hand. I’ve agreed to read/review an ARC of Wolf Untamed, but it’s not available yet. But I also didn’t want to lose my Wolf Marked momentum. So, I went ahead and read it now. 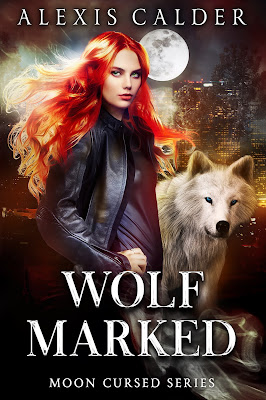 They tried to break me. Now I’m going to break them.

Cursed to never shift, the only thing I was looking forward to about the First Moon Ceremony was that the magic sealing me into Wolf Creek would break, and I could finally leave.

Instead, the ceremony reveals my true mate: Tyler Grant, future leader of my pack and the man responsible for my most recent concussion and black eye. He’s as brutal as he is handsome and fate is cruel to put us together.

There’s a rumor that a mating bond could break my curse and just as I’m getting my hopes up, Tyler destroys them all.

Instead of bonding with my mate, I’m beaten and left for dead.

A hot-as-sin feral shifter finds me and helps me back on my feet. But his help comes with a cost and I’m not sure I’m willing to pay the price.

With my former pack hunting me down, even an enemy might be a better ally than trying to stay alive on my own.

I generally enjoyed this. Though the writing is good, I did find the beginning quite repetitive. Calder wants the reader to understand how abusive Tyler and his friends are, so we’re shown and told again and again. But once that tapers off the book smooths out significantly. The villains are a bit one-dimensionally evil, but it’s made up for with a feisty heroine and interesting side characters. The book does end abruptly at a high tension point, nothing at all is concluded here. But I went in knowing that, so I can’t really complain about it. I think I know how it’s all going to end (or at least what some of the big reveals will be). It’ll be interesting to see if I’m right. Either way I’m here for reading the future books and finding out. 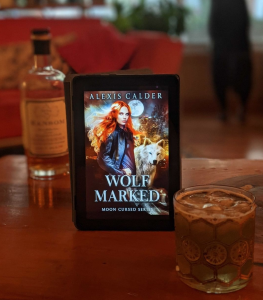