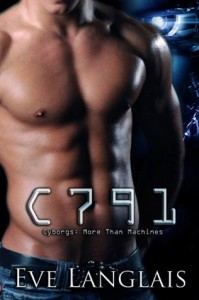 I grabbed Eve Langlais‘ C791 (More Than Machines, #1) from the Amazon free list. At the time of posting, it was still free.

Description from Goodreads:
Machines aren’t supposed to feel, but this cyborg can’t help falling in love.

Assigned as a specimen collector for a captured cyborg, Chloe is intrigued by the machine disguised as a man. Kidnapped during his daring escape, he shows her that despite the chip in his brain, his humanity is not completely lost.

Formerly known as unit X109GI, Joe is on a quest to discover his origin. While he doesn’t find the answers he’s looking for, he does discover that affection and lust aren’t just for humans. But when it comes to a battle between logic and love, which side will the cybernetic organism–once a man–choose?

Evaluating his feelings will have to wait though because the military isn’t done with Joe. But their threats against him pale in comparison before the shocking discovery of project C791, the revelation of which stuns the rebel cyborgs–and ignites a fury for vengeance.

I’ve read a couple of Eve Langlais’ books now and I generally enjoy them for their smouldering sex, blithely paired with enough levity to ensure the reader isn’t too cheesed out. I mean, a plot can get pretty corny and still be really enjoyable as long as it doesn’t try to take itself too seriously. I think this is where Ms. Langlais shines. However, I have to admit that this book is hovering around the 2.5 star mark and threatening to sink. It was not one of my favourites.

This isn’t to say it was all bad. There were still some good one-liners. The sex was still hot. In the middle section Joe turned from the alpha bad-boy cyborg to a cute, confused cyborg with disarming boyish charm that I really liked. The C791 reveal was a good one. Seth and Solus were fun sidekicks. As with so many of Langlais’ heroines, Chloe is described as beautiful and sexy as well as rounded, plump even, thereby breaking from the narrow societal standards of beauty. And though opening itself up for sequels, the story did end. There were some appreciable aspects to the story. So I didn’t hate it.

But I did hate the four important aspects of it. To start with, Joe’s dialogue was painful. Now, this was addressed. He was said to have not fully grasped human syntax. Fair enough, but there were some awkward passages, especially in the beginning. His first couple sentences in the book made me laugh out loud, and not in a good way. (It did seem to get better as the book progressed.)

Secondly, his character seemed unstable. Like I said, he started out as a strong, bad-ass leader of the cyborg rebellion. Then went all googly-eyed and little boy-like. Then ended up practically a basket case. He was inconsistent at best. Likeable, but undependable.

Third, the air at the end of the book got really, really thick with heavy sentimentality and overplayed emotions. Sci-fi erotica just doesn’t have the gravitas to support it, so it felt horribly unnatural.

**Spoiler***Lastly, and to me most importantly, the book employed the infuriating and cheap plot device of providing Chloe a history of sexual abuse that contributed absolutely NOTHING to the plot. It was COMPLETELY unnecessary. It was pure dirty TITILLATION. It provided opportunities for her to be called a dirty whore and threatened with future abuse, and nothing more.

This didn’t heighten the suspense for me. It just made me ask, “Why was that necessary?” Answer: It wasn’t. Sure, if a history of rape (repeated gang rape or otherwise) is an important part of a plot, I’ll endure it. But it wasn’t here. The rest of what was done to Chloe was enough to provide her with the necessary anger to move the story along. The periodic victimisation references were not needed. They were overkill to the extreme, unpleasant and came across (to me, anyway) as evidence that the author couldn’t or wouldn’t dig a little deeper than such a trite overused cliché. For anyone who’s read many of my reviews, you know this is a hot button for me. Pretty much ruined the book.

I have no doubt that this won’t be the last Langlais book I read. Not as long as she keeps popping them up on the free list, anyhow. But this will remind me to be a little more cautious as I approach them from now on.