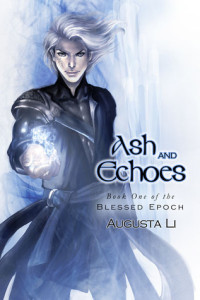 I bought a copy of Augusta Li‘s Ashes and Echoes from the publisher (Dreamspinner).

Description from Goodreads:
For the past few years Yarroway L’Estrella has lived in exile, gathering arcane power, but that power came at a price. Now it’s time for him to do his duty: his uncle, the king, needs him to escort Prince Garith to his wedding, a union that will create an alliance between the two strongest countries in the known world. But Yarrow isn’t the prince’s only guard. A whole company of knights is assigned to the duty, and Yarrow’s not sure he trusts their leader.

Knight Duncan Purefroy isn’t sure he trusts Yarrow either, but after a bizarre occurrence during their travels, they have no choice but to work together—especially since the incident also reveals a disturbing secret, one that might threaten the entire kingdom. But will it ultimately work in their favor?

When a third member joins the precarious alliance, it seems to cement the bonds between all three men. But the arrangement isn’t perfect: Yarrow knows the power inside him and fears getting too close. The mysterious newcomer was raised to believe love and trust are weaknesses. And Duncan struggles to accept them as they are. Saving their home will take everything they have—including the fragile relationship they’ve built.

Review:
I found this book to be a disappointment. It’s unfortunate too, because it has (or suggests it has) so many elements I love. I’m attracted to well drawn covers (not the horrid CG things so many authors use, but actual art) and this one has a very pretty cover. Fantasy. Check. Demonic possession. Check. Moral ambiguity. Check. A threesome. Check. Strong, dangerous men. Check. Looking at it from the outside, I really should have loved this book. But I just didn’t and I didn’t half because of objective quality reasons and half because I don’t like the type of book it turned out to be.

Let me clarify. On the objective side, I found the writing and dialogue very stiff. There was no natural progression of feelings between the men. It’s not insta-love or insta-lust, but from one page to the next they went from disliking in one case and hating in another (remember there are 3 of them) to lust and then almost immediately to love. And these are men who generally claim not to be able to love. One won’t allow it because of his demon, another has been trained not to feel emotion and the last puts his duty first, so love is not an option. But they all fall hard and fast. Even homosexuality being illegal and a three-way relationship being socially unheard of weren’t hurdles to them.

For three otherwise emotionally closeted men, they all spewed unfathomable amounts of open praise and adoration. It felt out of character for the men presented. In fact, none of the characters are particularly consistent, often acting in ways that they shouldn’t according to their character, as described. Yarrow was especially bad about this.

Ages were never defined. I needed this information since Duncan is said to be older and looks on Yarrow and Sasha as almost boys. This is a tad disturbing since Yarrow, who I’m guessing is in his late teens, maybe early twenties (but I’m leaning toward teens) lost a lover named Rini, who he consistently describes along the lines of ‘my Emiri boy.’ And since Yarrow’s history shows underage sex isn’t off the table in the book, I started imagining Rini as a tween. (It kind of squinked me out.) But also, I just needed to know how to visualise the men—teens, young men, middle-aged, old. It left my imaginings of them vague at best.

The world-building, while elaborate didn’t make a lot of sense. The multitude of goddesses worshiped by a strictly patriarchal society. A vague history that forbade mages to rule, but no real depth to it. No placement of mages in the society at large, meaning I had no understanding of the magic system. No placement of demons (if that’s what Yarrow has) in the pantheon, so no way to understand it’s existence, etc.

On the more personal side of things, I’m not into those books where characters constantly tell one another how wonderful, special, beautiful, sexy, amazing, important, awe-inspiring, handsome, enticing, smart, strong, loyal, etc, etc, etc, etc, etc, etc, etc, etc they are and that is exactly what most of this book is.

For one, people, especially men, don’t tend to be so effusive so it NEVER feels natural and believable. Two, it’s cringe-worthy. I can’t tell you how many times I just plain rolled my eyes at this book. Three, it’s repetitive. Four, it ruins a sex scene. Five…five, gag. It just makes me gag and there was just so darned much of it. I don’t like it in general. I sure don’t like it from men I’ve been told are (or have previously been) absolutely, 100% not the sort of men to engage in such conversations and declarations.

Lastly, I didn’t like the book’s ending. So, for another reader this book might be a hit. It was not for me.