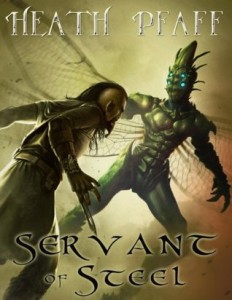 I snagged a copy of Heath Pfaff‘s Servan of Steel from the Amazon free list.

Description from Goodreads:
Having two of his fingers cut off at an early age hadn’t done much to make Xandrith an agreeable fellow. Besides marking him as a pariah and having him shunned by even his own family, it had also hurt. A lot. Being stripped of a few of his fingers and cast out of the Order of Mages had left him bitter and angry, but if there was any consolation to be had it was that he was doing rather well in his new line of work. While perforating people for money might not have been the most noble of callings, it was quite lucrative. Well, it had been quite lucrative.

In a conspiracy of fate seemingly beyond his control, Xan soon finds himself facing a dilemma of conscience, and that isn’t something he’s familiar with. One dilemma leads to another, and before long the mage-turned-assassin finds himself performing more and more honorable deeds. Worse yet, without even attempting to do so he manages to acquire friends and to develop a sense of compassion.

As Xan struggles with his burgeoning humanity, a terrible darkness begins to wake in the world. The Order of Mages, once an overbearing power of control, seems to be losing its grip as a terrifying doom of their own creation rises in the north. As if that wasn’t enough, the horror brought upon the world by the folly of the mages may only be the precursor to something far more sinister.

Review:
This is one of those books that is difficult to review, because I ended it thinking, ‘what a great book,’ but then thought way back to the beginning and realised how much terrane had been traversed between the beginning and the end. Suddenly the book felt gangly and somewhat unfocused.

It has some great characters. Xan has a dry, fatalistic (though he doesn’t believe in fate) sense of humour that I really appreciated. In fact, it carried the book for me. The world-building is fairly rich and other than editing (which is honestly in need of a little more attention) the writing is pretty good. But the whole book is a series of tasks, set one on top of the other and, in the end, any attempted climax just felt like one more hill on a long journey. It tends to sap the tension out of a story.

Also, there are a couple questionable coincidences that, unless later explained to have been arranged, are beyond believable. So much, in fact, that even the book comments on how lucky one in particular is.

My final say is that the book is worth reading, though, and I’ll be looking for the sequels. 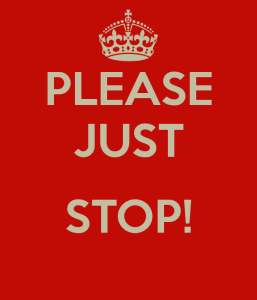 Ok, I’m gonna admit upfront that I’m being ridiculous. Novels are fiction, so there is absolutely no reason for this to annoy me as much as it does. But, as is often the case when you encounter something repeatedly, it simply does. What’s more, once it’s sneaks into your (or my) awareness you start to see it everywhere.

What is it that I’m seeing on the pages of so many books that I feel compelled to write a whole blog post to complain about it? Characters that get thirsty and then go to the fridge to grab a bottle of water.

I know, you’re probably confused. It’s such a small thing. But it has started to feel like every book I read lately, that’s set in any sort of contemporary setting—be it paranormal, urban fantasy, romance, comedy, etc—has at least one scene when someone grabs a bottle of water. But why bottled water?

Sure, plenty of real-world people drink bottled water; some might even keep it stocked in the fridge at all times. But I’d be willing to assert it’s far more common for thirsty people in their own home to drink water from a tap, a refrigerator filter or Brita or PUR type container. In other words, get a glass of water. How many of us really always drink bottled water at home?

I keep imagining these imaginary characters filling their imaginary land fills with billions of imaginary plastic bottles (or worse, their imaginary oceans). I want to run in and give them an imaginary Nalgene and scream, “It’s reusable.” 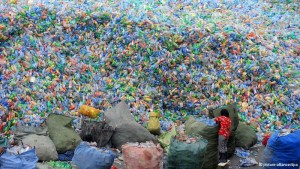 You see this on television too, but I’m willing to excuse it on set. I realise a sink would require plumbing, which most sets don’t have. Similarly, I suppose an author could argue that getting a glass of water, as opposed to a bottle, requires a character know where the glasses are and then to get one before filling it. It takes more words, more description, sure. But if that’s really the reason, it’s just plain laziness.

With some places banning the disposable plastic bottle, I’d like to see it go the way of the cigarette. Few newly written characters smoke. It’s just not cool anymore. Could we perhaps see fictional characters becoming environmentally aware and forgoing the Evian anytime soon? I sure would hope so. 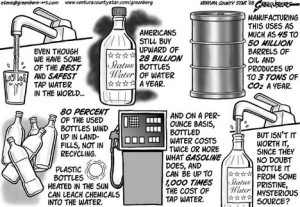 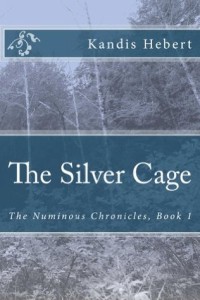