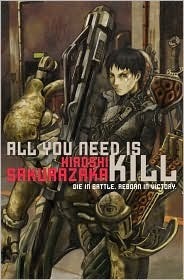 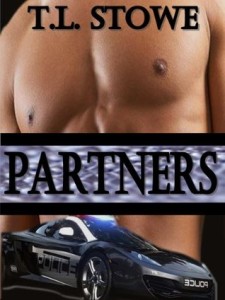 I picked up a copy of Partners, by T. L. Stowe from the Amazon free list. At the time of posting it was still free.

Review:
I’m afraid this review is all about the numbers. I didn’t plan it that way, but it turned out that way.

I picked this book up because I recently wrote a blog post about how much it annoys me when authors put tags in book titles on Amazon. I chose this book as an illustration of this, because it went one step farther. On Amazon it’s titled as such: Gay Romance: Partners: Gay Romance by T. L. Stowe (Author), Gay Fiction (Foreword). Seriously, did they think I’d miss that this is a book about gay men? And if I did, did they think I’d miss the first “Gay Romance” or the second? Better throw it in as an author too. And just in case I did somehow miss it, they use the word gay a further 13 times in the two-paragraph book description. The whole blurb is only 134 words long, so a full 10% of it is the word gay! I love m/m, but surely I’m not alone in thinking that’s overkill. Just how stupid do the authors think their readers are? I was astounded. 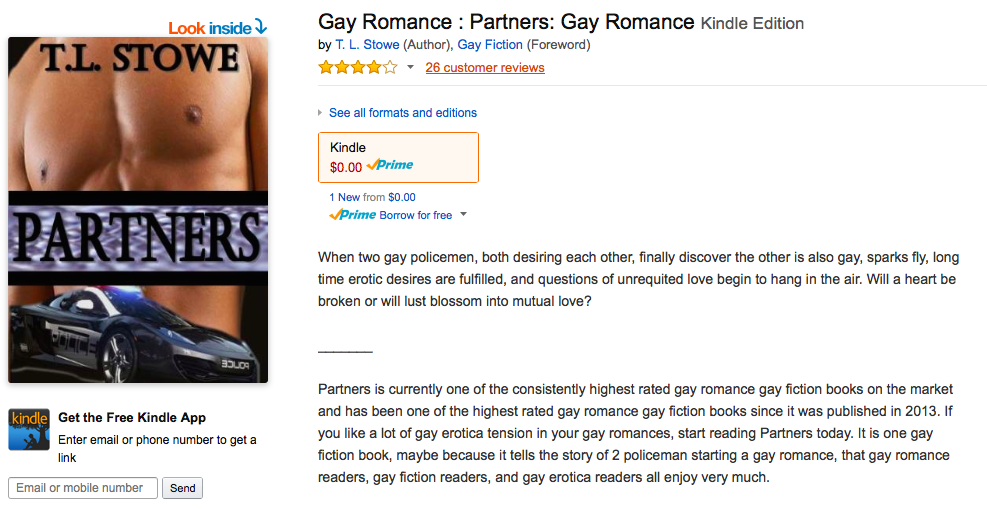 But then, I thought it might be parody and as parody I thought it might be a little funny. It reminded me a bit of Daffyd Thomas (Little Britton) who, despite being questionably gay, repeatedly insists that he’s the only gay in village, while remaining oblivious to the fact that everyone around him is having copious amounts of gay sex (unlike him).

So, I decided I’d best just read the book. Well, it’s not a parody. It’s a serious novel, yes, about gay men. And other than having two points that irritated me, it could have been an ok read…except the numbers. The author’s tendency to overuse words, as noticed in the blurb, haunted me throughout the book. And because I read on a Kindle I can show you just how much. These words stood out, not just because they were used so often, but because they were also unnecessary. I get it; these men are cops and thus, a bit dude-bro like. But the use of direct addresses tacked onto the end of sentences was vastly overplayed.

They called each-other buddy 28 times. And it felt like soooo many more. As soon as they kissed the first time the baby & babes stared. They used those endearments 40 times. But it was man that really stood out. It was used 245 flipping times in this book! Granted, some of them are obviously used as a standard noun, as in ‘The man turned around.’ But the vast majority were used as a direct addresses, as in the last comment of the book, ‘Me too man. Me too.’ And they’re all just like that, with no comma. I would really like to know what a me too man is. You can probably imagine what the combined effect of all these extra words was. Could someone maybe lend me something to pry my eyes from the back of my skull?

With a decent editor to address the repeat words, typos (come on, there’s one in the first line of the book, the fourth freakin’ word), missing words and grammar mistakes (commas, people, commas) this might have been pretty good. It’s a very sweet, friends to lovers, first time gay, maybe GFY book…except the wife.

Now, this is a personal niggle but I have never figured out why so many MM books have to create some false competition between gay men and straight women. I didn’t like that the author went to such lengths to highlight how much better sex with Alex was for Rick than with his wife. Prefer one to the other, but don’t make it about debasing the woman just because you have a preference. Similarly, I disliked that she was made out to be such a witch because she was always suspecting Rick of sleeping with other women. Fair enough, he wasn’t and that would get old, but he was fucking a man, so it’s kind of difficult to claim the moral high ground here and this dichotomy was never addressed. Really, the wife was hardly even considered as anything other than an obstacle to them moving in together and this wasn’t fair to her. Such selfish callousness (ostensibly excused because she’s supposed to be a b/witch) made it hard for me to respect the men or their HEA.

Lastly, Alex is gay. Rick is attracted to women and men, but by the end of the book he’s calling himself gay instead of bi (his attraction to women doesn’t seem to have died or anything) and this felt a bit like…is there such a thing as gay washing, like white washing in race relations, where everything but the dominant categories are glossed over and downplayed? I don’t know. While everyone is obviously entitled to their own sense of self-identity, it didn’t feel quite right to me.

All in all, a sweet enough story but, objectively speaking, it’s a pretty rough draft. 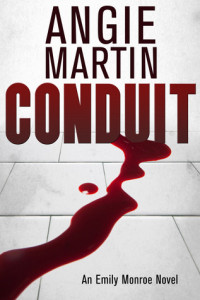 Author, Angie Martin sent me an e-copy of her novel, Conduit. I’ve also seen it on the Amazon free list.

Description from Goodreads:
How do you hide from a killer when he’s in your mind?

Emily Monroe conceals her psychic gift from the world, but her abilities are much too strong to keep hidden from an equally gifted killer. A savvy private investigator, she discreetly uses her psychic prowess to solve cases. When the police ask her to assist on a new case, she learns the killer they seek is not only psychic, but is targeting her.

The killer wants more than to invade her mind; he wants her. Believing they are destined for each other, he uses his victims as conduits to communicate with her, and she hears their screams while they are tortured. She opens her minds to help the victims, but it gives him a portal that he uses to lure her to him. With the killer taking over her mind, she must somehow stop him before she becomes his next victim.

Review:
I have to admit that this book just didn’t work for me. It might for some readers, to each their own.

I have been trying to come up with the right word to describe this (and writing like it), because I encounter it a lot. Maybe someone knows and can help me out. We all recognize a Mary Sue and Gary Stu (sometime Marty Stu), but what do you call it when the whole book–plot, narrations, characters, etc all have a Mary Sue feel to them. Pat, maybe?

I actually have a litmus test for this, even if I don’t have a title for it. My test is hugging. But what could hugging have to do with anything, you might ask? Well, it has been my experience, in reading several hundred books a year for several years that when you encounter a book in which there is lots and lots of hugging the author is using this small action as a weak demonstration that the MC is an open, good person, makes meaningful connections with people, etc. Similarly, it shows how comfortable those people are with him/her (usually her). Now, I’m a bit of a hugger in real life, coming from the touchy-feely hippy family that I did. But I don’t hug my BFF, my ex-boyfriend, my friend’s uncle, his cop partner and the nurse who cares for my mother in the nursing home. More importantly, all those people don’t come up and hug me.

But it’s not just about hugging. The hugging is almost always accompanied by a certain innocent narrative tone, in which small things (like a hug) are made big deals of. It’s like a pearl-clad, mary jane wearing, pastel sporting teenager swooning over their first kiss while the married 40-year-old, with the kinky nightlife that’s forced to listen to it thinks, ‘God, it really just isn’t that big a thing.’ Any romance in these sorts of books are always heavily descriptive, possibly purple, and almost all tell as the narration beats the reader over the head with how awe-inspiring one person or the other is, how meaningful the small unimpressive events are, and how in looooooove they are.

The fact that this book falls within this pat(?) grouping is a guarantee that I’m not likely to enjoy it, as I almost never enjoy these books. But this book also annoyed me in other respects. I hated that as soon as Emily got together with Jake she let him start making all her decision. I didn’t like their insta-love and, even worse, their insta-relationship, which was only compounded by their insistence on waiting to have sex until their relationship was more established. I don’t know, ‘I’m ready to let you rule my life’ and ‘I’m ready to die for you’ seems pretty established to me.

The one thing that saved this book for me was Leo and his wife. I adored their relationship. It really is a stand alone book. The editing seemed pretty clean, I don’t remember many cock-ups and to the right reader this might be a hit.