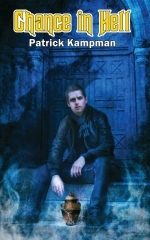 I downloaded a copy of Patrick Kampman’s Chance in Hell in October of 2012, from the Amazon free list. Thus, it qualifies for my TBR reading challenge, in which I’m trying to read books I’ve owned for two years or more.

Description from Goodreads:
Chance is a Texan vampire hunter until a botched raid kills his team and sends him running for his life. Looking for a place to lie low, Chance takes what looks like an easy job in California. Dispose of a mysterious object. No vampires involved. But Chance’s life is never that simple.

Within hours of reaching the West coast, his contact is murdered and Chance is left holding the key to a demonic weapon of mass destruction. To make matters worse, the weapon was stolen from the ruthless head of a multi-national corporation who will do anything to get it back.

With supernatural hit men on his heels, Chance has no choice but to turn to the creatures he once hunted. Soon he’s neck deep in otherworldly seductresses, rival werewolf gangs, ravenous witches, and dysfunctional vampires. His only hope is to gain their trust, and their help, before all Hell breaks loose.

Review:
Hmm, not bad…ok, I suppose. This is yet another book that was entertaining enough to read but contains nothing spectacular. It’s funny. I’ll give it that. And Chance seems like a nice, honorable guy. I respect that. The writing is pretty good and nothing about the editing threw me off. So, on the whole it was all right.

But it’s a bro-book; not that that’s necessarily a bad thing. I don’t just mean all the car, motorcycle and gun specs, or even all the ‘this is how you flatter a girl’ nonsense (a good bit of which is wrong, from a female’s point of view, BTW) but much of the actual humor and all of the romance is geared toward guys. Again, that’s fine. Men deserve books too.

But I have to confess that, while some sexual innuendo can be fun, this book is drowning in it. Add to that a diarrhea-mouth, 17-year-old ‘player’ who constantly hits on anything that walks and what you end up with is a ceaseless barrage of frankly juvenile jokes. Scaled back it could have been great, I thought it was really funny in the beginning. By the end, it had lost all of its lustre.

And the ‘romance’ was just as bad. Essentially, two ultra-sexy, powerful, possessive, competitive alpha-type females lay claim to Chance practically on sight ad then throw themselves at him. Isn’t that every man’s fantasy? No need to work for it. Plus, he seems to have a decided preference for one, so I never could figure out why he strung the second along (and according to the synopsis of book two, continues to throughout the series).

There is very little world-building or character development. I never felt Chance’s history as a hunter. He felt too much like an average college student to have also been a hardened hunter. And you learn none of the other characters’ history.

Plus, the whole ‘this is a dangerous artifact that I can’t give the bad guy’ is all just stated and not really supported in any way, so that it feels very random. A lot of people put their lives on the line for something no one seemed to need to verify. I honestly thought the plot twist at the end might turn out to be that the urn was actually empty the whole time and every one had just jumped to unfounded conclusions. This all left the book feeling shallow and a bit like a gloss.

All-in-all, an ok book that I didn’t hate but didn’t love either.