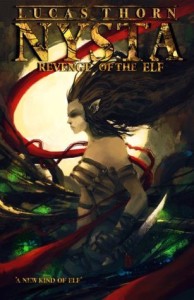 In June of 2012, I picked Lucas Thorn‘s fantasy novel, The Revenge of the Elf from the Amazon free list.

Description from Goodreads:
Nysta is a new kind of elf.

When nine killers rode out of the homestead with blood fresh on their hands, they reckoned that would be the end of it.

The lost spellslinger was looking for a way out. He figured Nysta could lead him to the safety of a town called Spikewrist. And then there was the tragic creature born in the darkest shadows of legend. He reckoned she would fight the greatest fight of all.

But none of them counted on the violence she would unleash. Because in the Deadlands there is no forgiveness. No mercy.

Winter in the Deadlands could be cold. But the revenge of an elf would be colder.

Review:
I  went into this book with high hopes of a strong,  kick-ass female warrior. And I had reason to. The following is from the latter half of the Author’s Note:

Nysta is certainly the culmination of many years of dissatisfaction in the presentation of female characters in fantasy.

As such, Nysta will never heal anyone with amazing healing powers. She will never drink tea and discuss dresses. She will not stand back and watch her boyfriend fight the monster.

She will not be rescued by the hero, because in my book, she IS the hero.

And in some ways Nysta is bad-ass. She’s certainly skilled with a blade or two (dozen). But that’s not really the same thing as strong. I could excuse all the tears and even the way her thoughts are scattered one moment and obsessive the next; she’s grieving the loss of the love of her life, after-all. (And Talek seemed wonderful and worthy of her love.)

But the author fell into the same trite trap as many others when he made her a victim of sexual abuse and circumstantially forced prostitution as a child (starting as young as seven presumably). The book also starts with rape threats and whoring comes up frequently in conversation or insults. Nysta’s very ashamed of what she had to do to survive and when discussing this history is the only time in the book that she feels fragile. I swear authors, there really are other ways for women to become strong. But you would never know it from reading fiction. How very pat.

I wouldn’t even mention it, since it’s basically the norm. Except that Thorn made it apparent in the above note that he was aiming to break the pattern of women’s presentation in fantasy. Then why go with a plot device so overused as to have become cliché? Men don’t have to be victims before they can become strong. They don’t need that forging process and frankly neither did Nysta.

What’s more, Nysta’s presumed strength is of a very male sort. She can kill more people than the next guy therefore she must be strong. But I would argue that’s skill and something else entirely. Internal strength needs to based on something more and Nysta lacks that. To paraphrase Chukshene, she’s still just that scared little girl, servicing some minor noble on her knees in a dirty back alley.

So, I’ll give it half marks for my hope of a strong, kick-ass woman warrior. She’s kick-ass sure, but she didn’t strike me as strong in any sense but the muscular type. Disappointing, to say the least.

The book also has a cool cover. But again, being as Thorn apparently wants to widen women’s available and acceptable place in fantasy, I should ask why she’s half-naked. Especially considering the book is set in winter and she’s fully dressed in leather armour and a full length, fur-lined cape (mostly even with the hood up) for the entirety of the book. Again, for someone trying to break new ground, Thorn keeps falling into disappointingly well-trodden paths.

As for the rest of the story, I’ll give it half marks too, because I liked it in a lot of ways, but feel very little compulsion to continue the series. For one, Thorn has a tendency to overuse things. Nysta, and to a lesser degree Chukshene, have a habit of dropping puns and one-liners. At first, it was funny. Then I couldn’t decide if it was genius or just cheesy. By the end and the 100th such occurrence, I’d started imagining a ‘ba-da-bum’ and a laugh-track in my mind each time one of the characters dropped a clanger. It had been wholly reduced to Dad Joke level humour and definitely fell on the super-cheese side of the equation. Same thing with Nysta’s constant threats and Chukshene’s endless needling, it was effective in the beginning but just disruptive to the narrative by the end.

And the end, or lack there of, is one of the biggest reasons I don’t think I’ll continue this series unless I come across the sequel as a freebie. The whole plot of this book is set up by the blurb to be about Nysta hunting down and killing her husband’s murderers. However, she doesn’t find them until about 80% into the book. Then there is about a one-page altercation in which most of them escape. That’s it. That’s the entirety of the fight between her and the men she’s hunting.

She fights some robbers, some zombie type things, walks, rides a horse, cries, refuses to eat, talks and talks and talks, but she doesn’t fight the Bloody Nine much at all. Then, just at the end something else entirely happens, opening the plot to a much wider path and the book ends.

You don’t get the satisfaction of seeing Talek’s killers caught or much of a sense of vindication on seeing them realise that Nysta isn’t ‘just a whore’ but a dangerous killer they should fear. You don’t know what’s possessed Nysta (she’s unconscious at the end). You don’t know why Chukshene is sticking with her. You don’t have much more than a hint at where the series is headed. It’s just one big question-mark, making this whole book feel like little more than a prologue to something more. It is not a stand-alone book.

The writing itself is pretty good. Mechanically readable with believable dialogue (outside of the puns). There were a couple editing hiccups, but not enough to bother me. I was confused with the world-building. The author does set up a rather complex religious and political landscape, but it’s set up, not described or explored. So, I only ever had a vague understanding of it. It was enough to follow the story, but not enough to feel fully invested in it.

The author also seems to have an odd attachment to spiders. Chukshene runs with his knees too high, like an injured spider. A hill looks like a spider squatting. Runes looked like spiders dancing. Someone is described as cold, like a spider. Plus, apparently Chukshene just doesn’t like them and they can get as big as a hand. I second Chukshene here, hate them, so I notice these things.

All-in-all, if I had gone into this book with different or no expectations, I might not be as disappointed with it as I am. It’s not a bad book, a lot better than many indies I’ve read. But I really wanted that strong warrior Thorn promised in the beginning and I didn’t find her.  (Maybe we just have very different ideas of what makes a woman strong, but I still finished in a sulk.)

And as one finale snarky side comment, though she never drank tea, Nysta did in fact discuss a dress, a red one. Maybe not in the ‘I’m a pretty-pretty princess’ way a lot of fantasy, especially YA fantasy (which this is not, it’s harsh, violent and gritty, with lots of cursing—none of which I mind) does when they want to let a man provide the woman with the femininity she’s obviously lacking by being a fighter, but still there was a dress, it was discussed.