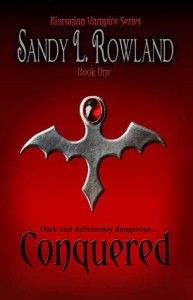 At some point, quite some time ago, I downloaded Sandy L. Rowland‘s book, Conquered, from the Amazon free list.

He’s lost his comrade to madness and has sworn against suffering the same fate. Time is out for the ruler of the western quadrant and any female will do.

Spunky reporter, Pepper Morgan, has lost friends, her mother, and a fiance to the devastating plague that ravished Earth before the vampires subjugated them. Desperate to reunite with her captured father, she throws herself on Rafe’s mercy.

Now, Rafe and Pepper find themselves bound by more than desperation and blood, but also by secrets that have the power to enslave humanity and threaten vampire survival. Can they overcome their inner demons and learn to trust each other, before it’s too late?

While the mechanical writing and editing in this book were fine, I found almost all aspects of the story, plot, characters and world disappointing. First, we had a Mary Sue who is chosen to mate the über sexy vampire because she was different, a special little snowflake unlike all the other vapid, beautiful women. Arghh, so cliché.

Next, we had a woman who in two weeks goes from not liking the vampire who is consistently an ass to her, to being in love. Then we had her developing a special power out of nowhere and somehow learning to use it in almost no time at all. We had baddies who conveniently leave doors unlocked and chains removed to allow for escape and miraculous recoveries. Not to mention, most of the events in the book came down to avoidable miscommunication or lack of communication. None of this is good, as far as I’m concerned.

But worst of all, the whole premise of the book made no sense to me. Somehow her love was going to keep him from going insane, because at a thousand years old vampires go crazy if he’s not mated. But first they had to be betrothed for exactly a month and if they had sex before that they’d both go crazy. Um, exactly what biological mechanism was keeping track of time and how exactly did his body know she loved him? I mean, what was causing this change. I get the theme, but it made no sense.

Speaking of biology, how exactly does an alien race evolve to need human blood to survive? I mean, what did they do before they came to earth? Seems like that would be an important piece of world-building, but it’s not addressed.

That last 10% also introduced a new character and the idea that vampires could be made as well as born, which hadn’t been mentioned once the whole book. I mean, if you can make vampire, why is there the chronic lack of females? Why not just make some? This is an unaddressed issue or inconsistency. As is, for example, the fact that somehow the baddie never faced insanity if he didn’t wait the required 30 days before raping his bride.

All in all, it’s an interesting idea, but poorly executed. The author spent far too much time telling us things we should have been shown. There are also a lot of threads left open, I assume for a sequel.