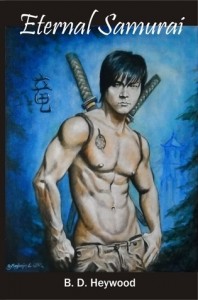 Description from Goodreads:
Tatsu Kurosaki Cobb, the last of an ancient samurai house, will not stop until he takes the head of the vampire that butchered his family. But his vow of revenge means he gives up on any hope for that once-and-forever love. Then he crosses swords with Saito Arisada, second-in-command of Seattle’s vampires and the most beautiful creature Tatsu has ever seen. The sexual chemistry between them is pure, hard, and undeniable. Unable to accept Arisada might be the killer, Tatsu begins a dangerous game. A game driven by the all-consuming thirst for blood that will force them to the extremes of love and hate.

Fukushū, vengeance. It is all that has sustained Saito Arisada for eight-hundred years. Sōhei monk turned vampire, he has searched for the returned soul of his lover who betrayed him and the Temple of Mii-dera. Arisada believes in only one thing—taking the head of the traitor. Yet, when Arisada sees that soul shining from Tatsu’s emerald eyes, his hatred shatters. He wants Tatsu in his arms and in his bed and in his heart. But Arisada’s samurai code of honor demands nothing less than Tatsu’s death. How can Arisada kill his unmei no hito—his soulmate?

From a bloody battlefield of feudal Japan to a world where humans and vampires fight for survival, Arisada and Tatsu must choose. At stake is not only love but honor.

Review:
I really quite enjoyed that, but I suspect it will have a rather small core audience. Because what it reminds me of more than anything else is a Yaoi manga. This despite it being a literary novel instead of a graphic novel. It just feels like yaoi in that strange, nebulous way of mental association.

You see, just as most fans of PNR or Urban Fantasy or even regular American M/M romance novels can often sketch out the basic shape of the plot most common to their genre of choice, this one follows yaoi’s established format in fairly recognisable ways. But you see, I like Yaoi, so I wasn’t at all put off by the similarities.

The association was undoubtably helped along by Heywood’s liberal use of Japanese terminology. No doubt my closet manga addiction and the two years I spent studying the Japanese language (which doesn’t get you very far, BTW) helped me out here. I suspect some readers would have appreciated that help, because though I knew enough to be able to pronounce the words and recognise all of the ritualised terminology (seppeku, kinbaku, kaishakunin, etc), some of the curses and a couple of the normal words (like daisuki), it felt like there were an awful lot more than was necessary. It tended to clutter the narrative at times, even when quickly followed by an English translation (which most, but not all were). If all those extra words had felt completely foreign, instead of just kind of foreign, they might have really grated on me.

Some of the English language did grate on me, if I’m honest, mostly during the extremely long sex scenes. You see these aren’t hearts and flowers, gentle, clean exploits. It’s often rough, dirty and … well, I probably can’t say realistic. It’s obviously not, but I thought the fact that things smelled, chafed, hurt, bled, and so on lent a real(ish) feel to it all. And while I appreciated this aspect of the story, some of the terminology used to create that same impression left me wanting–phrases like, piss slit or the liberal use of spunk–once or twice, fine, but over and over…not so much.

What I liked most in this story, and one more thing that reminded me of Yaoi, was Saito’s long standing, unquestioning, whole-hearted love for his unmei no hito (soulmate), regardless of the body it resides in. He pined for him for 800 years for gods sake. That’s what I call dedication and I found it to be one of the only sweet things about the story. Almost everything else had an edge of some sort. 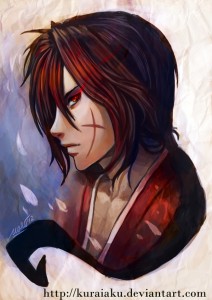 On a side note, while probably not purposeful on the author’s part, because of the red hair and scarred cheek I couldn’t help visualising Saito Arisada as Rurouni Kenshin. I found this a little distracting.

All-in-all however, while not without faults and inconsistencies, I enjoyed the read and would be up for trying another of Heywood’s works.