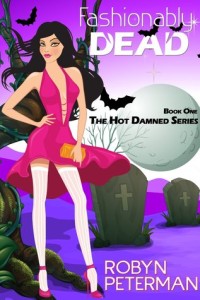 I grabbed Robyn Peterman‘s Fashionably Dead from the Amazon free list. At the time of posting, it was still free.

Description from Amazon:
Vampyres don’t exist. They absolutely do not exist.

At least I didn’t think they did ‘til I tried to quit smoking and ended up Undead. Who in the hell did I screw over in a former life that my getting healthy equates with dead?

Now I’m a Vampyre. Yes, we exist whether we want to or not. However, I have to admit, the perks aren’t bad. My girls no longer jiggle, my ass is higher than a kite and the latest Prada keeps finding its way to my wardrobe. On the downside, I’m stuck with an obscenely profane Guardian Angel who looks like Oprah and a Fairy Fighting Coach who’s teaching me to annihilate like the Terminator.

To complicate matters, my libido has increased to Vampyric proportions and my attraction to a hotter than Satan’s underpants killer rogue Vampyre is not only dangerous . . . it’s possibly deadly. For real dead. Permanent death isn’t on my agenda. Avoiding him is my only option. Of course, since he thinks I’m his, it’s easier said than done. Like THAT’S not enough to deal with, all the other Vampyres think I’m some sort of Chosen One.

Holy Hell, if I’m in charge of saving an entire race of blood suckers, the Undead are in for one hell of a ride.

I feel like the author had a really fun idea, what could be engaging characters, a good sense of humour and some hot sex and then took it all, mixed in a bowl and multiplied it times ten until it was patently unpalatable. Seriously, the idea here is so good. The writing is too, but my god(dess), it’s all just taken soooooo far.

Astrid liked Prada…so she’s a Prada Whore and we’re reminded of it about 1,000 times. She becomes a vampire….then, through no effort on her part, becomes an ultra-vamp. She’s ‘The Chosen One’…then develops unbelievable and unbeatable power and skill that save the day repeatedly, despite her not knowing how she does what she does. (Don’t you just love when mysterious superpowers randomly pop up and rescue the heroine with no conscious decision on her part?) She not only can do a bit of magic here or there (when vamps aren’t supposed to be able to do any), she can shoot hundreds of silver bullets from her fingertips. She can destroy whole roomfuls of enemies (sometimes, but apparently not always, since at other times she just didn’t bother).

She’s chosen as a mate…by the most powerful vamp in the area. She gets hot around him…and then can orgasm repeatedly at a touch on her back. They have sex…and then when that isn’t wild enough for our heroine they throw in handstand positions and things that she thinks probably should be legal. Seriously? Sex and handstands, when she’s portrayed as not particularly sexually experienced.

She wants a family…then she gets one, and then another, and then another. Everyone can’t help but love her eventually. She’s funny and sarcastic…then it just becomes annoying in it’s suicidal banality. She can apparently say anything to anyone at anytime with none of the consequences other vampires would face. She gets a guardian angel…then a special fairy…then her best friend goes all super-power too. She’s too special for a girl who was just some normal Mary Sue a day earlier. She’s mated to the local ruler, daughter-in-law to the vampire king, daughter to the demon king, granddaughter to the king’s best friend, guarded by the most notable fairy to come around for 2,000 years, best friends with the fairy queen, and trained by a powerful angel who also has an important position. It’s all just too much…far, far, far too much.

Especially since I don’t know that I actually grasped why she needed all the special skills to accomplish the task ‘The Chosen One’ was meant to do. Actually, I wasn’t really even all that clear on what that was to start with. Maybe she’ll need to do more powers in the future, but as it stands much of her amazingness seemed surplus to requirements.

Further, the book is incredibly repetitive. It recaps itself at regular intervals, gives the reader the same information more than once and I just plain lost track of how many times I read, ‘What the fu…’ Scaled back, this could be a really good book. I mean it is funny. It is well written. The editing is pretty good. (I noticed a few errors, but far fewer than in a lot of indie books I’ve read.) But it’s completely unbelievable and after a while I just started groaning and rolling my eyes. Plus, it’s a freakin’ cliffhanger. At least it’s not a novella. It’s an appreciably long book, but still doesn’t have a conclusion.