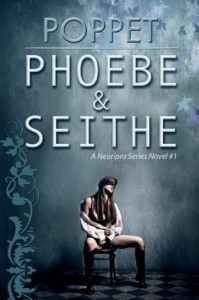 I grabbed Phoebe & Seithe from the Amazon  free list. It’s by someone named Poppet. I tell ya, that’s gonna wreak havoc on my last-name, first-name alphabetised list of reviews. I’m just sayin’.

Description from Goodreads:
Phoebe has the worst taste in men and after storming out on Brian she goes from the hearth into the pyre. Seithe has an immediate hold on her from the moment they touch. He’s more dangerous than Russian roulette and yet he makes her feel alive, exhilarated, safe. Infected by his intoxication she is obsessed with the man who changes more often than a chameleon at a disco.

Seithe is more than a man, he’s a supernatural, one who puts Phoebe into immortal danger. Now she’s hunted, betrayed, and deliberately misled.

This is a scorching journey to reawaken your senses. Phoebe’s light can only be found in the darkness of Seithe’s home, in his bedroom, in his arms.

Review: **spoiler Warning**
I’m torn on how to rate this one. At some points, I really liked this book. This is important to note, because I’m about to list a series of complaints that will make me sound like I didn’t. But they were the potholes in an otherwise smooth experience. While generally enjoying the book, I had some really frustrating moments reading it.

The first came about because of the unique writing style. It uses a lot of short, clipped sentences, often consisting of a single, descriptive word. “Angry.” “Hot” “Scared” “C-c-c-cold” This is definitely used stylistically, as opposed to a lack of writing skill and it does fit the tone the book wishes to create, especially since Phoebe spends so much of it angry, but it also doesn’t allow for a lot of description. I happen to like those details and I missed them.

The unexpected writing carried into the romantic scenes too. There is a lot of foreplay in this book. A full 39% of the book progresses in various forms of sexual teasing (really, there’s little else) before there is a sex scene and it’s the most obfuscated sex scene I’ve ever encountered. Not un-erotic, but not clear on what’s happening either. Really, they all kind of felt that way. They were sexy, but more because of Poppet’s descriptions of emotions than actual actions. I feel like I should call this erotica, but on reflection the sex isn’t graphic at all. It just feels that way. Odd, I know.

Also odd is the fact that Phoebe accepted all the strange paranormal things she encountered 100% without question. She noticed them, rationalised some of it away and simply ignored the rest. There wasn’t any sense that she thought it strange that peoples’ eyes and hair changed colors “every 32 seconds” or that Seithe could blind her at will or transport them about. None! How realistic is that? For me this was a strong weakness in the plot and it REALLY needed to be addressed.

This lack of believability was exacerbated by Phoebe’s amazing ability to trust. The fact that the whole thing has a satisfactory ending doesn’t really negate the fact that Phoebe was almost too stupid to live for returning to Seithe again and again. Really, all logic suggests that she should have been running like hell in the opposite direction. He kept insisting she trust him and then doing things that PROVED she shouldn’t (BIG deal type things, you know, like try and kill her), then insisting she trust him again. And you know what, like a mindless idiot she did. This was amazing to me.

I also couldn’t always follow her leaps of logic about why Seithe was doing the things he did. Sometimes it felt like magic that Phoebe understood. For example, at one point he was feeding her and she suddenly understood that he was trying to teach her about instincts. I get the linguistic gymnastics going on here, he was putting food IN her mouth, therefore it could lead to INstincts. But somehow seeing those words on paper and connecting random actions to a meaningful but vague theme aren’t quite the same thing. How did Phoebe get there? There were a lot of these sorts of miraculous “ah-ha” moments. In fact, the happy ending comes about because of one.

Lastly, to have the whole thing boil down to some form of brotherly one-upmanship, that instantly dissolved with no lingering ill-feelings a) stole a little of the books gravitas and b) was damned unbelievable. I mean, come one, Phoebe had made her choice abundantly clear, so why did the trial have to happen? And if the two were so hostile toward one another how did they make peace so quickly? Not to mention the fact that they pretty much hijacked phoebe’s life, manipulated, terrified and forced her to question her own worth. How come she wasn’t pissed off? Felt like a very convenient HEA to me.

Again, there were a number of aspects of this books that made me go “grrr,’ but for the most part I enjoyed the experience of reading the book. I’d be more than up for reading another of Poppets works.

On a side note: I THNK that this is a repackaging of the Pravus series (or more exactly, a combination of the Pavus and Neuri series), making this a retitle of Seithe: Pravus. This is an issue for me, because I happen to have a copy of Zauran (Pravus, #3) that I picked up on the free list last year. I think it’s probably repackaged as Zaria and Zauran, which is listed as book 2 of the Neuripra series. I’d read it now if I was certain it was the same storyline. I really hate uncertainty in these matters though.

1 thought on “Review of Phoebe and Seithe (Neuripra, #1), by Poppet”