The other day I discovered Amazon’s Matchmaker. It tells you which of the ebooks you own have audible companions and what the price is. I’d known you could get audible versions of your kindle books at a discount, but I’d not found any convenient way to see which books were being offered. It was exciting to come across the solution and I went through my list and purchased several inexpensive Audible books.

I wish I didn’t have to aim for the inexpensive ones. I just read a blog post by Nora Roberts, in which she talks about readers who demand cheap books and how that devalues the work authors put in (among other things). Now, she was talking about people who take advantage and harass authors, not readers who look for a sale. But either way, my book budget is what it is and, while I utilize my library and buy books where I can (so authors do get some profit), I definitely don’t buy many at full price, utilize the free lists and keep an eagle eye on the sales. I feel guilty about it sometimes.

Outside of price, a side bonus of getting audio copies of ebooks I already have is that it’s also a great way to chip away at my very long TBR list. This year is turning into the year of the audiobook. I’ve listened to far more than I’ve physically read. This lets me listen to them without adding a new book to the list. It’s just a great solution for me.

So, onward and upward. The first of the Audible book buying binge books I listened to was Southern Spirits, by Angie Fox. I initially picked this ebook up as a freebie in 2016. I’m pretty sure it’s perm-free.

When out of work graphic designer Verity Long accidentally traps a ghost on her property, she’s saddled with more than a supernatural sidekick—she gains the ability see spirits. It leads to an offer she can’t refuse from the town’s bad boy, the brother of her ex and the last man she should ever partner with.

Ellis Wyatt is in possession of a stunning historic property haunted by some of Sugarland Tennessee’s finest former citizens. Only some of them are growing restless—and destructive. He hires Verity put an end to the disturbances. But soon Verity learns there’s more to the mysterious estate than floating specters, secret passageways, and hidden rooms.

There’s a modern day mystery afoot, one that hinges on a decades-old murder. Verity isn’t above questioning the living, or the dead. But can she discover the truth before the killer finds her?

Shallow, but a perfectly passable bit of fluff. It was readable, entertaining and I liked the main character just fine. I did have a bit of trouble believing she’d have taken all the blame and financial penalty of calling off the wedding and not told anyone the horrible things her ex did. And the fact that the new love interest was so involved with the ex’s family really marred it for me. How would that work? Really? And it’s worth noting that the blurb calls hims “the town’s bad boy,” but he’s an ex-Marine cop. About as far from bad as you can get in a cozy, paranormal mystery. All in all however, I’d read more by Fox and Tavia Gilbert did a fine job with the narration. 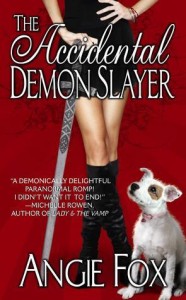 I grabbed a copy of Angie Fox‘s The Accidental Demon Slayer from the Amazon free list. I believe that it is perma-free.

Description from Goodreads:
It’s never a good day when an ancient demon shows up on your toilet bowl. For Lizzie Brown, that’s just the beginning. Soon her hyperactive terrier starts talking, and her long-lost biker witch Grandma is hurling Smuckers jars filled with magic. Just when she thinks she’s seen it all, Lizzie learns she’s a demon slayer-and all hell is after her.

Of course, that’s not the only thing after her. Dimitri Kallinikos, a devastatingly handsome shape-shifting griffin needs Lizzie to slay a demon of his own. But how do you talk a girl you’ve never met into going straight to the underworld? Lie. And if that doesn’t work, how dangerous could a little seduction be…?

Review:
Meh. I’ve seen it done before and done better. Mechanically the writing was fine, as was the editing but the story itself and the plotting…disastrous. It’s a longish book. There should have been ample time to develop characters, a world and relationships However, Ms. Fox appears to have not bothered.

If this book was a cake, the eggs would still be in the shells (maybe even still in the container), the flour in its bag, the butter in the dish, the milk in the jug, etc, all tossed in a bowl to sit next to each other. All the ingredients are there (a hunky love interest, an unavoidable destiny, an evil antagonist, a spunky side-kick, etc), but not mixed, measured or cooked.

There is no depth to any of the characters and some, most notably Dimitri, are wildly inconsistent, as is the plot. Time is indeterminate. The whole book takes place in 2 or 3 days (not sure which), but characters talk about things happening days ago that appear to have happened hours earlier, at most. And at one point someone goes on what must have been an extended adventure in the time it takes Dimitri and Lizzie to sit up and say, ‘hi.’

A shirt is ripped open a page after it was slowly unbuttoned. Dimitri admits to a lie that couldn’t have held water with the rest of the knowledgeable coven. Plus, he talks like he just showed up but is also supposed to have been hanging out with the witches and werewolves for a while. The antagonist, who has been killing and absorbing the power of all the witches in America for a hundred plus years (so, you know strong and skilled), is somehow easily defeated by a slayer with two days of “training.” Honestly, how believable is that? I could go on, but you get the point, I imagine.

The book’s one real redeeming quality is the humour, but even it’s so over the top and ridiculous it can’t carry the load. No doubt, this will appeal to some. I’m just not one of those people. Too bad too, I spent forever deciding to read it.

Edit: Why the hell is she holding a sword on the cover? She uses a “switch star” (think Xena’s….round thing…with points). Not once does she use a sword. What’s more, the ONE TIME anyone does, it’s a katana.