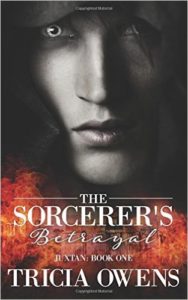 I picked up a copy of Tricia Owens’ The Sorcerer’s Betrayal from Amazon, when it was free.

Description from Goodreads:
When the mercenary Caledon meets a young man named Hadrian he falls instantly, hopeless in love with him. But Hadrian is a mystery: shy and secretive, hailing from an island supposedly inhabited by sorcerers; he has come to Caledon’s city to recruit the mercenaries for a well-paying job offered by Hadrian’s father… but it is a lie. Hadrian is far more dangerous than his gentle disposition would suggest, and what he wants with Caledon and the mercenaries of Rhiad will change the land of Juxtan forever and set in motion a prophecy that will bind two men together in love and hatred until death.

A note on why I read it now:
When I downloaded the book it had a different cover. I was reordering my To-Read shelf recently and noticed this new one. It gave me pause because last year I conducted what I called the Annoying Close Up Guy Challenge, in which I read four books with this same stock photo on the front. Mostly because it annoyed me to keep scrolling past it; thus the challenge title.

So, I was surprised to come across yet another one. (Actually, I came across three; this and A Vampire’s Rise, by Vanessa Fewings, and The Shadows Birth, by Ryan T. Delson.)

It’s like this must be the only stock photo of a mysterious man available on the internet ,or something. And how do they all seem to find themselves on the my To-Read shelf? I

n the end, I thought I’d do an Annoying Close Up Guy Part 2 challenge.

Edit: You guys, I just found another one, The Phoenix Prince by Kristen Gupton!

Review:
This is essentially two books, neither of them good. The first half is insta-love and lots and lots of cheesy, naive, instructional virgin sex. There is no character development or plot progression. Just two people meet, are instantly attracted, rut like animals and declare their ever-lasting love for one another (based on what, who knows).

The second half is almost unreadable for all the flashbacks. It does provide you some background information though. Unfortunately, it’s so full of plot holes it’s painful to read. I’ve read self-fulfilling prophecies before, but never one where someone seemed to so obviously be setting one up.

The writing is often fine, but it’s poorly edited and there are frequently no transition between scenes, such that two people are having sex in forest and then in the next sentence they are in a bed (on another occasion apparently) and then suddenly one is on a horse. To top it all off, one of the main characters doesn’t follow into the second half, he just disappears, and the book doesn’t conclude.

So, that’s another reading challenge under the belt. You can find the reviews here:

You’ll notice that The Mark of Saturn is not listed. I’m afraid that I wasn’t able to finish that one. You can find my DNF ‘review’ here, on Goodreads. It turns out I have an early edition, which was titled Lumen: Blood Luminary but was the first edition of the same book. However, I can only assume (or desperately hope) that the subsequent editions improved on that first one.

Of the three books that I read (five if you include the tag alongs), Shadewright was the star. It was a tad slow and ended on a cliffhanger, but it had one really cute character, strong writing and an interesting plot.

All in all, I’ll call it a success.

I picked up S. C. Reynolds’ Living Dead Girl and Stalking Dead (book 1 & 2 of The Vampire Hunter series) from the Amazon free list. I believe the whole series is perma-free. (At least it was still free at the time of posting these reviews, a year after originally downloading.) 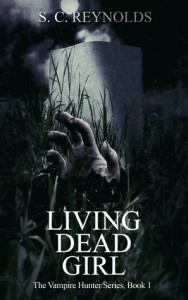 Description from Goodreads:
When Aurora Stone awakens to find she’s been buried underground, she frantically claws her way to the surface. But the nightmare has only just begun; she was buried in her own grave and has been resurrected on the one year anniversary of her death.

Aurora immediately seeks the help of her best friend, Henry, who is no longer the awkward sixteen year old she remembers from a year ago. Henry is tall, muscular, with piercing blue eyes.

But Henry isn’t the only one who’s captured Aurora’s attention. Lucas, a sexy vampire, is watching her every move. He’s been ordered to send her back to the grave, but he is immediately attracted to Aurora and can’t bring himself to re-kill her.

As Aurora struggles with her new un-dead body, she must make a decision between the boy next door and the vampire who has nothing to lose. And time is running out – plagued by blackouts she can’t control, Aurora knows her days may be numbered. She was brought back for something epic, but will she get the chance to find out what?

Review:
Run, run away as fast as you can. You want nothing to do with this book. It’s horrible. The main character is a shallow, mindless, boy obsessed nitwit that is so uninteresting I barely managed to finish the book. If this had been the only problem I had with the book I probably would have shrugged it off as a weak YA, but it’s not.

This book is flat…I mean FLAT. There is no emotional resonance or peak anywhere in it. Example: Aurora has just mysteriously risen from the grave. Does she freak out? Search for a reason? Show any evidence that she’s been dead? Nope, she gets upset that the boy she liked is now dating her friend. A frightening vampire kidnaps her and informs her that he’d been told to kill her. Does she get mad or frightened? Nope, she worries about what to wear. She is told that her vampire friend was an admitted killer at one time. Does she get nervous? Nope, she’s mad he didn’t kiss her. A werewolf attacks and almost kills her. Does she get the shakes and go into shock? Nope, she has a makeup session.

There is just nothing realistic about Aurora’s rising from the dead. Even down to the rising. Look at the cover of the book. See that dirty, grime incrusted hand? Yeah, she’s supposed to have dug her way out of the grave. But when she gets to Henry’s house, she and her pretty pale pink dress are clean. So clean, in fact, that she even chooses to wear it again. How did she manage that?

Time passes that isn’t accounted for. Aurora pulls the cliché TSTL storm-out-and-get-lost-and-endangered shtick when angry. She makes no effort to figure out what happened to her, even when it’s obvious that people around her have the information. Assumptions are made and treated as fact (that she’s a living dead girl, as opposed to a vampire, zombie, etc) based on nothing. The same belief is shared by several people with no sharing of information. She managed to go clothes shopping despite being dead for a year and having no discernible source of income or credit. She’s supposed to be hiding in someone’s house for several weeks without them noticing. People get stumbling, hiccuping drunk on three beers and seventeen year olds somehow manage to go on quick beer runs. The younger sister is horribly slut-shamed because her skirt is too short. There is the start of a love triangle. The book is from Aurora’s 1st person POV for 25 chapters and then we randomly get a chapter from someone else’s POV, before going back to her. (It’s jarring.) The editing needs attention and the author uses ridiculous, contrived occurrences to artificially drag out reveals.

Basically, I found very little to enjoy here. I’ll admit that the writing was fine, but the story is undeveloped, lacklustre and a time-waster. However, I read it because I’m doing a reading challenge in which the second book in this series factors, so I’m committed to at least the next book in the series before I can pretend I never read it. *sigh* I will persevere. 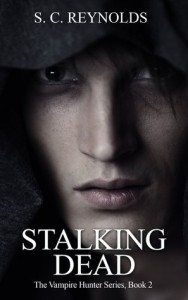 Description from Goodreads:
In the second installment of The Vampire Hunter series, Aurora finds herself getting dangerously close to Lucas, the sexy vampire who was hired to send her back to the grave. As Lucas fights his own attraction to Aurora, he can’t bring himself to follow through on his orders to kill her. Instead, he tries to help Aurora and her best friend Henry solve the mystery behind her resurrection. They dig up her grave to find out what item of hers was placed there when she was brought back to life.

As it becomes increasingly obvious that Henry thinks of Aurora as more than a friend, she is torn between the two guys. As much as she is drawn to the mysterious Lucas, she is also deeply attracted to Henry. But deciding what she wants will have to wait – when Lucas didn’t follow orders, someone else was hired to do the job. And the new hunters on the scene have a history with Lucas. They would like nothing more than to kill Lucas and send Aurora back to her grave – permanently.

Review:
Soooo, yeah….this wasn’t an improvement on the first book. Nope, still annoyed me at almost every turn. I still found Aurora to be a vapid, useless, unpleasant heroine. I still found the love triangle contrived and infuriating. I still found both heroes substanceless.

The main problem I seem to have with this series is that a girl rose from the dead. She’s being hunted by supernatural assassins. “Agencies” (don’t ask me what that means or entails) all over the world know about her “case” (don’t ask what constitutes a case). She has a mysterious medium who pops up with timely advice on occasion and a vampire lusting after her (and vice versa) but the book is essentially dedicated to a weak love triangle, Henry’s basketball practice and whether his father is having an affair or not.

Seriously, given everything that’s supposedly going on, I don’t really care about her adolescent obsession over who she has or hasn’t kissed (even as YA). I sure don’t care who his father may or may not be kissing. And the whole, ‘he might be having sex with a man, thus his whole life and marriage must be a lie, since he obviously can’t also be attracted to women’ instant assumption is insulting to the extreme. Talk about jumping to conclusions and making simplistic judgements. Ugh.

Aurora never presses on important points. People all around her have information she should want. I mean, how she died is worth pressing for.  But she never does. She just lets it all slide. Useless!

I have the rest of the series and if reading it wasn’t so painful, I might be interested in knowing the cause of the ‘living dead girl.’ But I just can’t face any more of the dull, flat recitation of daily events.